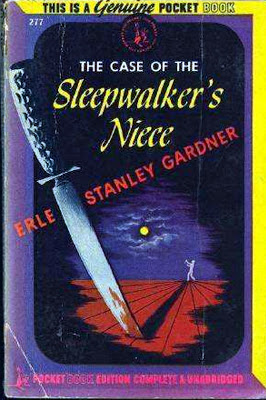 I don't have anything about Patricia Highsmith today. I've tried to read her work in the past, but unfortunately she's one of those authors whose work just doesn't resonate with me. Instead I'm going with this rerun of a post about another classic mystery author. This post originally appeared in slightly different form on March 1, 2007.


Erle Stanley Gardner piles up the complications early on in this Perry Mason novel from 1936, when Mason was still a grinning, wise-cracking tough guy, at least part of the time. In this one we have a millionaire with the bad habit of sleepwalking with a bloody carving knife in his hand; his beautiful, astrology buff niece; a hypochondriac, black-sheep-of-the-family half-brother; a golddigging ex-wife; a crackpot inventor who may be a crook; and assorted other hangers-on and shady characters. Everybody winds up spending the night in the millionaire’s Hollywood mansion, including Perry Mason, and in Gardner’s version of an Agatha Christie/old English house sort of mystery, somebody winds up dead. Mason’s sleepwalking client is charged with the murder, so Mason, Della Street, and Paul Drake plunge right in with the usual mix of snappy banter and questionable legal shenanigans to prove the client innocent and uncover the real murderer.

Gardner is in pretty good form in this one. The story zips along really fast, the wisecracks are funny, and there are some nice long courtroom scenes in the final third of the book. I had the murderer pegged pretty early on, which is unusual for me when it comes to Gardner’s books. I sometimes have trouble figuring out what happened even after Mason has explained everything. But I’ve discovered over the years that for books that are so plot-heavy and supposedly light on characterization, it’s not the plots I remember from them. The fun is in the pace and dialogue and the interaction among Mason, Della, and Paul Drake. And, of course, in watching Mason confound the long-suffering Hamilton Burger and Lt. Tragg (or in this case, Sergeant Holcomb, who hadn’t been replaced by Tragg yet). THE CASE OF THE SLEEPWALKER’S NIECE is only an average entry in the series but a perfectly enjoyable way to spend some time. 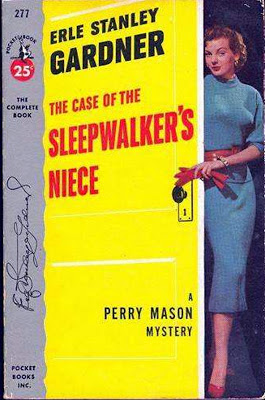 I'm with you on both Gardner and Highsmith. I don't really remember the details - I read it in 1976! - but in general those early ones were the most fun.

I'm with Jeff on and you on both Highsmith and Gardner.

I'm stunned that so many people don't like Highsmith, as she's one of my favorites. Maybe I'm just darker than I realized.

I have never read Highsmith before though I have read most of Gardner's novels not including this one. I'll never feel shy of saying loudly that Gardner is one of the most entertaining mystery authors I read in the last century.