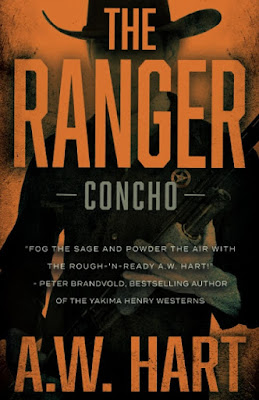 Concho Ten-Wolves is half black, half Kickapoo, a former Army Ranger, and currently a Texas Ranger working out of Eagle Pass, Texas, in this thriller that launches a new action/adventure series from Wolfpack Publishing. Charles Gramlich is the top-notch author behind the A.W. Hart house-name on THE RANGER: CONCHO, which was just released today.

The opening section of this novel, in which Concho takes on a gang of neo-Nazis who have taken over a shopping mall in Eagle Pass and are holding hostages, is spectacular, with plenty of great action and several stand-up-and-cheer moments. What follows is even better, with Concho getting involved in a double murder case that takes on some personal ramifications before it’s done, along with some political maneuvering centered around the Kickapoo Tribal Police and Concho’s own superiors in the Rangers. It’s a twisty, satisfying plot that never skimps on the action.

Gramlich has gotten this series off to a great start. THE RANGER: CONCHO is intelligently written, packs plenty of punch, and has one of the most compelling and likable protagonists I’ve encountered in a while. The next book will out later this summer, and I’m already looking forward to it. Highly recommended.

Thanks for the capsule review. I'll have to snag a copy.