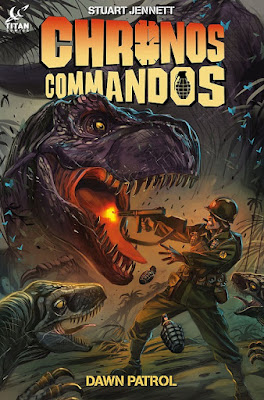 A friend of mine mentioned this the other day and compared it to the old DC Comics series The War That Time Forgot, so I had to check it out. I'm definitely the target audience when it comes to anything about World War II G.I.s fighting dinosaurs.

I was pleased to find that this five-issue comic book series is pretty good. It's been reprinted in trade paperback and as an e-book and is worth reading. The concept is that a combined scientific and military force called The Watchmakers, led by Albert Einstein, is tasked with traveling through time to foil the plots of Nazi time travelers. The leader of one of the field teams is a tough non-com called only The Sarge, who, along with his men, is in prehistoric times with his men as this yarn opens.

Through some bad luck, The Sarge and one other soldier are the only ones who make it back to the present (well, the middle of World War II, which is the present as far as this series is concerned) only to find that things are in even worse shape there. Nazi agents have infiltrated the Watchmakers, wrecked their headquarters, and stolen a vital component of their time traveling equipment, escaping into prehistoric times with it. The Sarge and a new squad are sent to recover it and prevent the Nazis from changing the course of history.

All of that is set up in the first issue, and the rest of the series is nearly non-stop action. If you enjoy G.I. vs. dinosaur battles, Albert Einstein with a tommy gun fighting Nazi agents, and mind-bending time travel paradoxes, CHRONOS COMMANDOS is for you. Stuart Jennett's script is excellent. I'm not as big a fan of his art, but he's a decent storyteller and the art, by today's standards, is not bad at all. Taken together, Jennett delivers a very enjoyable yarn that I enjoyed quite a bit. Recommended.