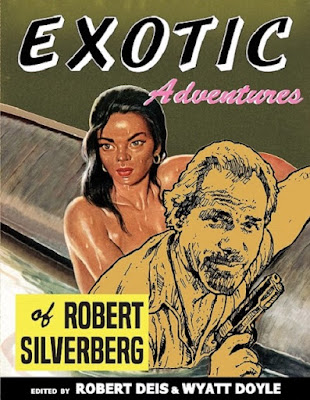 One of the greatest names in science fiction, Robert Silverberg's work is beloved by millions of readers worldwide. He has been awarded virtually all of the top honors in the realm of speculative fiction, including multiple Hugo Awards and Nebula Awards, and induction into the Science Fiction and Fantasy Hall of Fame.

But his long career as a writer includes many lesser known detours outside SF. One of those detours led to this intriguing set of stories, written and published in 1958 and 1959 for EXOTIC ADVENTURES, a short-lived men's adventure magazine (or MAM) that emphasized tales set in foreign locales then considered mysterious and intriguing. Silverberg proved so adept a storyteller in this mode, he was soon composing nearly the entire magazine under a variety of pseudonyms.

Now, with Silverberg's full cooperation, The Men's Adventure Library presents these long-lost tales of exotic adventure, most never before reprinted, in a unique facsimile presentation that mimics their original publication in the 1950s.

EXOTIC ADVENTURES OF ROBERT SILVERBERG invites you to take a walk on the wild side. Experience life as a smuggler in Tangier...witness the secret sex rites of Uganda...visit a nudist paradise on the French Riviera...take a bride for the night in Kashmir...lose yourself in the opium dens of Vietnam...and much, much more in globe-trotting adventures spun entirely from the vivid imagination of one of speculative fiction's most honored voices.

EXOTIC ADVENTURES OF ROBERT SILVERBERG is available as a 118-page softcover, and as a deluxe 142-page hardcover with additional stories.

(These stories are just really entertaining, and the book is beautifully put together by editors Robert Deis and Wyatt Doyle. Several of them, with the addition of a little more plot, easily could have been expanded into lurid but also really entertaining novels, had Silverberg chosen to do so. My favorites were "Safari of Death", "Bride of the Jaguar God", and "Island of Exiled Women". Those titles ought to give you a pretty good idea whether or not this is a book for you. I loved it. And yes, that's Silverberg himself on the cover, in a reworked version of a cover by Rafael DeSoto that first appeared on the April 1957 issue of FOR MEN ONLY. If you're like me and enjoy revisiting that era from time to time, I highly recommend EXOTIC ADVENTURES OF ROBERT SILVERBERG.)

Posted by James Reasoner at 6:49 AM

I get paid the day after tomorrow, and I know where some of that money is going to go. Thanks for the heads-up.

This one sounds really really tempting. I've read some of Silverberg's sleaze pulp from that era and it's surprisingly good. This sounds even better.