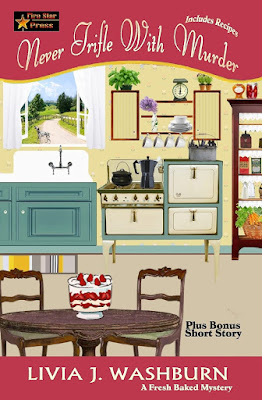 In the latest from Livia J. Washburn, the nationally bestselling author of the Fresh Baked Mystery Series, Phyllis Newsom learns to make a trifle that’s to die for…

While Sam Fletcher is playing dominoes with the guys, Eve Turner is busy flirting with the English chef since she has a fascination for English accents and handsome men who can cook. This puts her in competition with a couple of other ladies from the senior center, who also have their caps set for Chef Alfred Dorrington.

The third and final class features desserts, and more than the stove heats up when the trifle is poisoned! Once again Phyllis finds herself involved in a murder case filled with hidden motives and colorful characters.

(I love these books because I always get to read them before anybody else. And, of course, because they're funny and well-plotted and full of great characters, surprises, and poignant moments. I get to sample the recipes, too! The trade paperback of this one also includes the Fresh Baked Mystery short story "The Coconut Bunny Butt Caper", which was only available digitally until now. NEVER TRIFLE WITH MURDER is also available at Smashwords, Barnes & Noble, and Kobo.)

Posted by James Reasoner at 3:19 PM