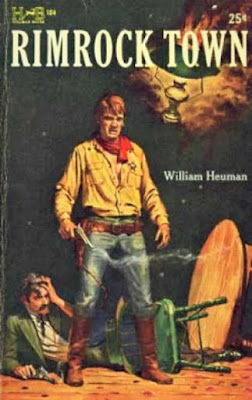 The mining novel is a popular sub-genre of the Western. Sometimes it’s mixed with another sub-genre, such as the ranch novel, and in a book like that you’re nearly always going to have a big brawl between cowboys and miners somewhere along the way. William Heuman’s RIMROCK TOWN, published by Hillman in 1957, is a mining novel without a cowboy in sight, or a cow, for that matter. It’s set in Rimrock, Montana, a thinly disguised version of Butte, and centers around the bitter rivalry between two mining tycoons, Boyd Garrison and William Andrews.

Winding up in the middle of this brewing war is newcomer Harlan Craig, who owned a stage line in California that went out of business following the arrival of the railroad. Now at loose ends, Craig has drifted to Rimrock to see if he can make his fortune some other way. When he saves Boyd Garrison from an ambush, the mining magnate hires him as a bodyguard, which puts Craig in the thick of trouble, because Andrews has started importing gunmen to destroy Garrison’s operation.

Oh, and there are two beautiful women in the mix, as well, the daughter of the local judge (who is in Garrison’s pocket) and another newcomer to Rimrock, an ambitious redhead who opens a dress shop. There’s a nicely done romantic rectangle involving those two ladies, Craig, and Garrison, but Heuman doesn’t spent nearly as much time on that as he does on gunfights, ambushes, brutal fistfights, sabotage, explosions, and a harrowing battle deep underground.

Heuman is one of my favorite hardboiled Western writers, and he’s in excellent form in this novel, which I raced through and thoroughly enjoyed. If you like traditional Westerns and come across a copy, RIMROCK TOWN is well worth reading.

I have this one, and now I'm going to read it. Heuman may have been the first western novelist I read as a kid. I liked everything he wrote, but three that stand out in my memory are "Captain MacRae," "Roll the Wagons" and "Rider From Texas." I've always intended to read the rest of his work, and re-read some of my old favorites. It's been a very long time--about 60 years--but I seem to remember that he often had two female characters vying for the interest of the protagonist.

Yes, there's nearly always a romantic triangle, or sometimes a rectangle, in Heuman's novels. I know I have a copy of ROLL THE WAGONS, but I don't think I have the other two you mention. I'll have to check on that, and if I don't, I'll see if I can find them.