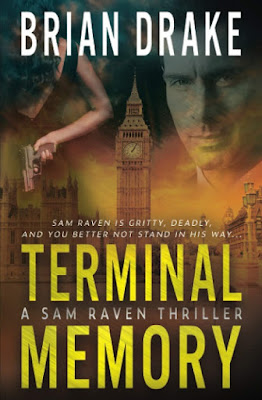 Brian Drake has been making a name for himself as an author of action/adventure novels for the past few years. TERMINAL MEMORY is the first book in his latest series and features Sam Raven, a former CIA agent who has left the Company and become a sort-of-freelance vigilante for hire, due to some mysterious tragedy in his life.

After a short section that introduces Raven and has him rescuing a kidnap victim, the main storyline of this book involves a more personal mission. Several years before this book opens, while Raven was still working for the CIA, he and four fellow agents were involved in a mission in Afghanistan that saw them captured and tortured by terrorists. Now three of those former agents are dead, leaving just Raven and his traumatized former lover Mara Cole. It’s up to Raven to find Mara, keep both of them from getting killed, discover who’s behind this apparent vendetta and why, and deliver some swift and deadly justice to them.

I really enjoyed this book. Too many contemporary thrillers suffer from a bad case of bloat and are at least twice as long as their plots justify. Not so TERMINAL MEMORY. Drake doesn’t waste a word and keeps things moving at a very fast pace most of the time. When the characters do slow down to take a breath, those scenes are well-written, too. There are two more Sam Raven novels out already, and I look forward to reading them. If you’re an action/adventure fan, TERMINAL MEMORY gets a high recommendation from me.

Good point about how bloated thrillers tend to be these days. Do publishers assume readers require 300+ pages before they will pay for a book? John D. MacDonald could blow a reader's mind in 150 pages or less. He didn't need any padding at all.

The original edition of THE DEEP BLUE GOODBYE from 1964 is, what, 144 pages? No more than 160. But when I picked up a reprint of it in the Nineties, it was almost 300 pages long. Enormous font and a ton of white space. Now, my tired old eyes don't mind big fonts and plenty of white space, but that bordered on ridiculous.