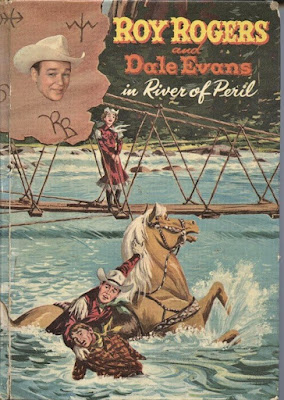 When I was a kid, I read a lot of the juvenile novels published by Whitman, many of them based on TV shows or movie stars I liked. I was a big Roy Rogers fan, so I would have read this one if I’d ever seen it. Clearly, I just never came across a copy. Until now. (That’s an Internet scan of the cover, by the way. My copy is beat up and has loose covers.)

ROY ROGERS AND DALE EVANS IN RIVER OF PERIL is a clumsy title for a pretty good book. Unlike many of Roy’s movies and his TV show, which were contemporary Westerns including modern technology and even Cold War espionage, this novel is in a more traditional Western vein with nothing more advanced than railroads and the telegraph. As the book opens, Roy is on a secret mission for an unnamed U.S. president who’s pretty clearly Theodore Roosevelt, which places the time period as very early 20th Century.

Roy’s job is to find out who’s trying to keep settlers out of the Bitter River country in Idaho, which the president wants to open for settlement by homesteaders. He’s assisted in this effort by a talkative old-timer named Kammas Tibbs, who bears more than a passing resemblance to Gabby Hayes. Dale shows up, even though Roy tried to keep her from taking part in what might be a dangerous job. There’s a gang of bad guys ramrodded by a head henchman who would be played by Roy Barcroft is this was a movie, and a mysterious mastermind behind all the villainy. Since this is a novel aimed at young readers, nobody gets killed, but there’s plenty of gunplay and a few brutal fistfights, plus some good scenes involving the rapids in Bitter River. This is almost a plot that could have worked as one of Roy’s late features directed by William Witney and written by Sloan Nibley.

Speaking of writers, the author of this novel is by-lined Cole Fannin, but that was actually veteran pulpster and paperbacker Frank Castle. Castle wrote a bunch of hardboiled Westerns and crime novels, but he was a thorough pro and could turn out juveniles like this, too, and in fact wrote quite a few of them. He had a very distinctive style in some of his paperbacks, but either he kept it under control on this assignment or some of his more oddball sentence structures were edited out. What’s important to me is that I enjoyed this fast-paced yarn and thought Castle did a good job of capturing Roy and Dale’s personalities. If you’re a fan of their movies, I think this book is well worth reading if you can find a copy.