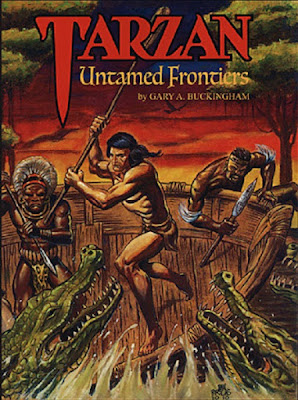 Tarzan wasn't my introduction to the work of Edgar Rice Burroughs, at least not if you're talking about the novels and not the movies based on them. That was the novel A FIGHTING MAN OF MARS, which I've written about here before. But very early on, I bought a copy of the Whitman edition of TARZAN OF THE APES (the one with the Official Ape-English Dictionary; I'd bet a hat some of you have a copy of that very edition still on your shelves) and was hooked on the series. I think I've read all the Tarzan novels, some more than once, and also read Fritz Leiber's TARZAN AND THE VALLEY OF GOLD and Will Murray's two Wild Adventures of Tarzan novels. The character is one of my all-time favorites. I even wrote a Tarzan fanfiction novel when I was in junior high. I'm talking probably 30,000 to 40,000 words. The handwritten manuscript is long gone, of course.

So when I heard about a volume called TARZAN: UNTAMED FRONTIERS, collecting a novella and a novelette about Tarzan by Burroughs scholar Gary A. Buckingham, I had to have a copy. I'm glad I was able to get my hands on one, because these two yarns are thoroughly entertaining. The title novella is a prequel to one of the best novels in the series, TARZAN THE UNTAMED, and concerns the Waziri tribe's move across Africa to make their home in the area where Tarzan establishes his own headquarters. There are some excellent action scenes in this one. The novelette, "Tarzan and the Secret of Katanga" (first published in the hardback edition of Will Murray's novel TARZAN: RETURN TO PAL-UL-DON) is even better. This is a sequel to TARZAN THE UNTAMED and is set in the days leading up to World War II. The story finds Tarzan battling Nazi agents trying to take over a uranium mine, which is good enough by itself, but that mine holds a dangerous secret that makes the story even better. Great battles against man and beast abound.

Probably the best thing about these stories is that Buckingham really captures Tarzan's personality, both as the King of the Jungle and as John Clayton, Lord Greystoke. There's more Tarzan by Buckingham in the pipeline, and I'm looking forward to it.

The present volume is a limited edition and is available direct from the author. You can find information on how to get a copy here. I should also mention that it has a spectacular wraparound cover by Dan Parsons, as well as interior illustrations by Parsons, Neal Adams, Joe DeVito, Chris Adams, and Peggy Adler. Beautiful work, all the way around.