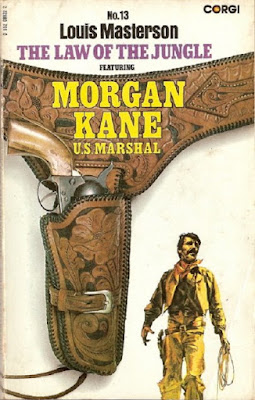 (This post originally appeared in somewhat different form on May 19,2006.)

I've always liked Westerns that take place in non-traditional settings. This novel certainly fits that description. U.S. Marshal Morgan Kane is sent to the wilds of the Yucatan Peninsula to rescue a group of American scientists who have been trapped there by an uprising among the local Indians. Naturally Kane runs into a lot of trouble along the way, including some colorful pirates.

This is another entry in the long-running series by Norwegian author Kjell Hallbing, writing under the pseudonym Louis Masterson. More than eighty Morgan Kane novels were originally published in Norway, and a couple dozen of them were reprinted in England by Corgi Books. I've picked up a few over the years. Hallbing had a very distinctive style, and according to everything I've read, translator Phil Newth captures it accurately. The action scenes are very well done, and Morgan Kane has to be the most angst-ridden Western hero I've ever encountered, enduring all sorts of physical and psychological torment in the course of the books. They're off-beat enough that it took me a while to get used to them, but now I've become quite a fan and am looking forward to reading the others I have on hand.

(UPDATE: All those other Morgan Kane paperbacks I had were lost in the fire of '08 before I got around to reading any of them. I have one or two in e-book editions but haven't read them, either. I need to do that.)

Posted by James Reasoner at 5:51 AM

Never read any of these.

Reading UK editions of Morgan Kane led me to yje Norwegian publisher and subsequently getting my Jason brand start there. A change encounter that proved to be fruitful.