(This post originally appeared in somewhat different form on April 17, 2007.) 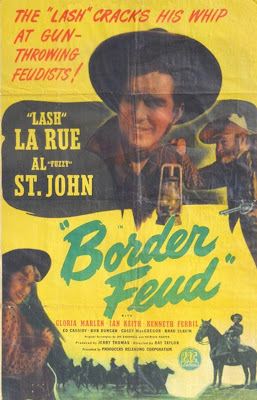 I’m sure that I saw some Lash LaRue movies when I was a kid, since I watched just about every Western movie that was on TV – and there were a lot of them in those days. But I don’t really have any memories of seeing any. A while back I picked up one of those cheap public domain DVDs with a couple of Lash’s movies on it, BORDER FEUD and GHOST TOWN RENEGADES. I finally got around to watching BORDER FEUD, from 1947, in which Lash plays his usual character, Marshal Cheyenne Davis.

Like all the Westerns made by PRC, one of the notorious Poverty Row studios, BORDER FEUD was shot cheap and fast and looks it. Quite a bit of time is taken up by stock footage and the acrobatic antics of Al “Fuzzy” , who plays the comic sidekick Sheriff Fuzzy Q. Jones. The plot is standard stuff: the bad guys stir up a feud between co-owners of a mine so they can grab all the gold for themselves, and yes, the mastermind behind the plot turns out to be exactly who you think he’ll be. Mistakes abound. To distract the villains, Fuzzy takes the bullets out of his gun (six at most) and throws them in a hot stove so they’ll all go off at once. A volley of thirty or forty shots blasts out. Then Fuzzy opens fire with the gun he just unloaded and didn’t have time to reload. At another point, calls Fuzzy “”, and there’s no explanation or further mention of the name. The acting is uniformly bad, with Lash and Fuzzy turning in the best performances.

Now, having said all that (and I’ll bet most of you can guess what’s coming), I thoroughly enjoyed this movie. Some people can’t stand Fuzzy St. John, but I actually find him funny. He’s no Gabby Hayes, of course, but then who is? Fuzzy’s a good second-tier sidekick. And Lash LaRue really deserves his reputation as the Humphrey Bogart of the B-Western. He looks and sounds and acts like Bogie and makes a surprisingly effective hero. I certainly wouldn’t call this movie good, but I would have loved it when I was eight years old. I still enjoyed it, and now I’m looking forward to watching GHOST TOWN RENEGADES.

UPDATE: I may have been looking forward to watching GHOST TOWN RENEGADES when I wrote that post, but I never got around to doing it and don't have that DVD anymore. But you can still get it on Amazon (the link is below) and I just might do that. One of these days.
Posted by James Reasoner at 6:00 AM

When I was 8 Lash Larue was one of my heroes. The movie itself may have been poorly done but when he slashed at those bad guys with his whip the wait was forgotten. He wore black but was the good guy. I was an easily entertained kid. Long live Lash.