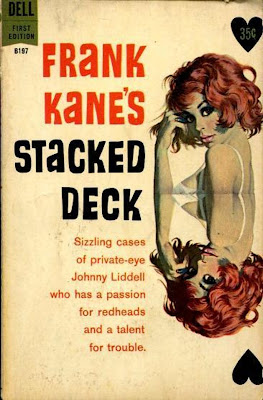 Frank Kane's private eye character Johnny Liddell began appearing in the detective pulps in the mid-Forties, but he became more well known as the star of a series of novels beginning with ABOUT FACE in 1947. A few of the Liddell novels were published in hardback, but most were paperback originals published by Dell, with fine covers by Robert McGinnis, Ron Lesser, and Victor Kalin. Kane has a reputation for being a generic writer who's a little too fond of punning titles and is also notorious for repeating descriptions, bits of business, and lines of dialogue from book to book. I'm not sure if this rises to the level of self-plagiarism (I'll address that issue later in this post), but I've read quite a few of Kane's books and found them pretty entertaining.

STACKED DECK is a collection of novelettes and short stories starring Johnny Liddell. There's no indication of where they originally appeared, but my guess is that they're from mystery digests such as MANHUNT, MIKE SHAYNE MYSTERY MAGAZINE, and THE SAINT MAGAZINE. I know Kane's work appeared in all of those places. Also, some of the stories appear to have been original to this collection. 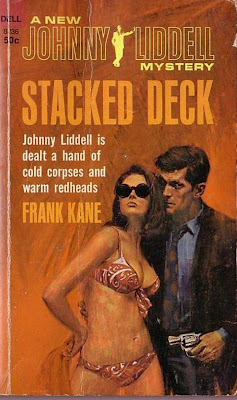 "Dead Set", the opening story, finds Johnny far away from his usual stomping grounds in . He's in untangling a case involving a beautiful starlet, a gossip columnist, some transplanted East Coast mobsters, blackmail, and murder. In "Dead Drunk", Johnny is back in working on an insurance fraud case in which a rival private eye is mixed up. "Dead Reckoning" is about Johnny protecting a sultry redheaded torch singer with a secret (a perfect part for Christina Hendricks) from a vicious mobster. "Dead Run" opens with Johnny looking down at a murder victim, a washed-up crooner and movie star who's trying to make a comeback, only to run into a bullet. "Dead Wrong", about a hit-and-run accident that may be murder, features Kane's attempt to write "beatnik" dialogue. It's way out, daddio. In "Dead End", motivated by the suicide of a beautiful blonde, Liddell goes after a pornography ring. "The Killing" concerns Liddell's efforts to prevent some gangsters from fixing a horse race. In "A Grave Matter!", a beautiful redheaded cigarette girl has already been murdered when the story opens, and Johnny has to find her killer.

I thought all of these stories were a lot of fun. Not classics of the genre, by any means, but for somebody like me who grew up reading hardboiled private eye stories (and watching private eye shows on TV), they're very enjoyable.

As for the self-plagiarism charges, I think some of it stems from the fact that Kane had certain phrases and bits of business that he liked to use again and again. Most prolific writers do that, I think. I've written so many Westerns I've probably written some paragraphs that are almost identical, purely by accident.

Kane does carry it to extremes now and then, though. In this collection, "Dead Wrong" and "A Grave Matter!" despite having completely different plots, have scenes that are almost word-for-word the same. I never would have noticed that, of course, if they hadn't been in the same collection. Some editor at Dell must have been dozing a little at the switch back in 1961.

That said, I really enjoyed STACKED DECK. An e-book edition is available from Prologue Books, and if you like good old-fashioned, two-fisted private eye yarns, I highly recommend it.

And other digests and pulps, too...Kane and Liddell being about the only "brand-name" figures to appear in some of the most down-market of the 1950s/60s digests, certainly...

STACKED DECK was pretty hot stuff when I read it as a 12-year-old kid back in the Sixties. It took me a couple of weeks, but I managed to find a fistful of Frank Kane paperbacks at various used bookstores and thrift stories. Loved the covers on the Frank Kane DELLs!

Sexy paperback covers evidently can have a big influence on young boys. I also was 12 years old, but in the fifties, when I discovered the James Avati Signet paperback covers for the Erskine Caldwell novels. I fell in love with the sexy girls from GOD'S LITTLE ACRE, TOBACCO ROAD, etc.

I hope you did not come to the same bad end that I did, covered in pulp chips, stumbling over stacks of paperbacks and digests, becoming a penniless begger because of my book collection.

All because of those hot covers!

The male model on that Dell paperback is of course Steve Holland, the wonderful model that appeared on probably a thousand or more of paperback covers.

Holland was used by nearly every cover artist in New York during the 60s and '70s. His chiseled features and expressing hands are all over male-action and Western covers. As well, he was the model for Jim Bama's DOC SAVAGE covers and Pete Caras' THE AVENGER covers.

James, you've done it again. Between this and the Kane review over on Mystery File, I've dipped into the used book inventory here and there is a copy of this one.

Solid stuff. I'd put him on par with Arthur Lyons or Dennis Lynds. Not a trailblazer bu a solid storyteller and easily worth the time.

I think Kane wrote every episode of the old B/W Mike Hammer show that I ever saw.