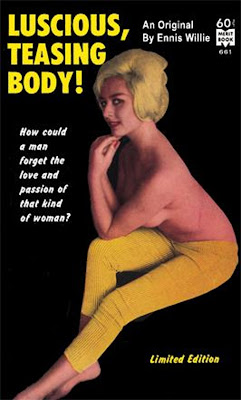 Several of Ennis Willie's novels have made a well-deserved comeback in a pair of handsome Ramble House editions, SAND'S GAME and SAND'S WAR. Here's one that hasn't been reprinted yet, but it should be. LUSCIOUS, TEASING BODY is a stand-alone instead of an entry in the series featuring the former mobster Sand. The protagonist here is Tripp Fortune, and when he shows up in the Quarter, the vice district of an unnamed town (I'm pretty sure it's not intended to be the French Quarter in New Orleans), he immediately sets off fireworks because gunners working for the local crime boss, Big Jake Dunken, are after him. This is a real problem for Fortune, because other than his name and a beautiful stripper called Joy, he doesn't remember a thing.

Yes, it's the old amnesia bit, but like Harry Whittington in the classic BODY AND PASSION, Willie not only makes the plot fresh, he puts a heck of a twist on it, springing a late surprise that I didn't see coming at all. Before he gets to that point, he sends Fortune on a blood-splattered tour of the Quarter in which he clashes several times with Dunken's men. It's not all guns and guts, though. Fortune also meets several gorgeous women who fall for him and help him in his quest to find out who he really is.

Despite the title and the cover, the sex scenes in this novel are pretty tame by today's standards, as they are in most of the books from that era. And like many others in this sub-genre, it's more of a hardboiled crime novel than anything else. A really good one, too. Willie was a fine writer who could mix over-the-top action with the same sort of bleak poetry of desperation you find in Orrie Hitt's best novels.

It strikes me that with their very brisk pace and relatively short length, Ennis Willie's novels are perfect candidates for e-books. I hope some enterprising publisher will realize that and make arrangements to reprint more of them. I'd buy 'em all.
Posted by James Reasoner at 6:00 AM

During those days it looks like being a cover photographer for Merit Books sure was a great gig.

Does Charles Ardai know about this one? It seems like a good Hard Case candidate.

It's only about 30,000 words, too short for a Hard Case Crime book. But Stark House could reprint them three to a volume.