While Joanna was in the hospital in , I had a chance one day to pay a quick visit to the big Half Price Books on , only the second time I've ever been there. Bill Crider and I went there one time during Cluefest, the fondly-remembered mystery convention that used to be held in . Here's what I picked up on this trip.

OPERATION CHECKMATE and OPERATION WHIPLASH – Dan J. Marlowe. These are from later in the series, after it was retooled into an espionage series and Earl Drake became a secret agent instead of a thief. These books don't have a great reputation, but I've never read any of them, so I was curious.

THE OTHER BODY IN GRANT'S TOMB – Richard Starnes. A hardboiled mystery by an author I hadn't heard of, featuring two-fisted journalist Barney Forge as the detective.
GIFT OF DEATH – Edward S. Aarons. An early (1948) mystery novel by the author of the great Sam Durell series, originally published under the pseudonym Edward Ronns. This 1967 reprint is from Macfadden Books, which would eventually be bought out by my first publisher, Manor Books.
KRAKATOA, EAST OF JAVA – Michael Avallone. An Avallone novel I've never read, based on a movie I've never seen. Of course I wasn't going to leave it there.

SLEEP WITH THE DEVIL – Day . Another Macfadden reprint of a mystery novel originally published by Lion Books in 1954. You can't go wrong with Day Keene. At least I never have.
THEY WALKED LIKE MEN – Clifford D. Simak. Another hardboiled reporter protagonist, but this time in a science fiction novel about alien invaders who try to take over Earth by, uh, buying up real estate. Well, I suppose it could work, and I'm sure there's more to it than that. Simak never disappoints, either.
RUSSIAN AMERIKA and REPUBLIK – Stoney Compton. A couple of alternate history SF novels by an author I'm not familiar with. I'm not as big a fan of alternate history as you might think I would be, although I've read quite a bit of it and even written a few stories that fall into that category. But when it's done well, I do like it. We'll see.

GUNHAND'S PAY (apa THE SUNDOWNERS) – Archie Joscelyn. Western novel from the prolific Joscelyn. Some of his later books are pretty bad, but everything I've read of his from the Fifties (this one was published in 1956) was excellent.
QUICK ON THE SHOOT – George C. Appell. I've seen George C. Appell's name in various pulps, but I don't recall ever reading anything by him. The multiple copyright dates on this one – 1950, '51, '52, '53, and '55 – as well as what appears to be an episodic structure are tip-offs that it's actually a collection of stories reprinted from ZANE GREY'S WESTERN MAGAZINE rather than the novel it's made out to be. The protagonist is a drifting gunfighter in the 1890s named Ross Ringler.
JEMEZ BRAND, L.L. Foreman/RANSOME'S MOVE, Kyle Hollingsworth. An Ace Double Western from 1971. I'm not familiar with Hollingsworth's work, but his novel here seems to be part of a series featuring a gambler named Santee Ransome. I bought the book, though, for the L.L. Foreman half because it's actually a pair of pulp novellas from 1941 and 1942 starring his series character Preacher Devlin. I've been wanting to try these.
SADDLE AND RIDE – Ernest Haycox. A novel originally serialized in COLLIER'S from December 1939 through February 1940.

HELLER FROM – William Heuman. Great cover on a novel from one of the best authors who did hardboiled Westerns for Gold Medal. I expect to like this one a lot.
ABOVE THE PALO DURO – Noel Loomis. Another hardboiled Gold Medal Western from an author with a fine reputation. (The cover's not as good as the one on the Heuman novel, though.)
THE HELL-FIRE KID – Steve Shannon. Not a Gold Medal, but rather a Crest Original. I don't know why they did that with some books. I have a nagging feeling that Steve Shannon is a pseudonym, but I don't know that for sure and haven't been able to find out. If anybody knows, I'd appreciate the information.

– Eugene Cunningham. I've read enough of Cunningham's pulp work that I pick up every novel of his I come across, even though I haven't gotten around to reading any of them yet. My friend Don Herron is a fan of Cunningham's work.
SUNDANCE: EMPIRE – Peter McCurtin. The final book in the long-running series created by Ben Haas under the John Benteen name. There really was an author named Peter McCurtin (I have an editor friend who knew him), but the name was also used as a house-name, so I don't know who actually wrote this one. But it's the final book in the series so it's a curiosity if nothing else.
CHANCE McGRAW – Mary Louise Manning. This looks sort of like a Western and sort of like a historical romance, and it must have sold a ton of copies because I remember seeing it everywhere in the used bookstores in the Eighties. (It was published in 1980.) I tend to like novels with female gunslingers, but the real reason I bought this one is because I'm reasonably sure "Mary Louise Manning" was really Lou Cameron.
As usual, there's no telling when I'll get around to reading all these books. But I fully intend to read each and every one of them. That's my story, and, well, you know the rest. (More scans below.) 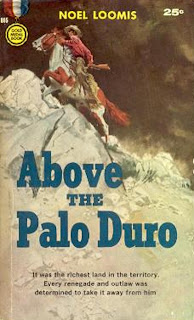 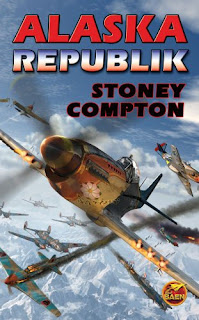 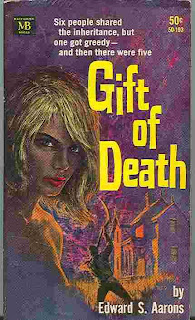 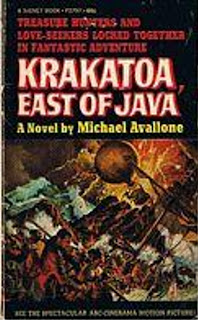 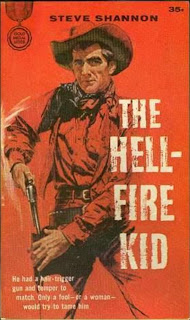 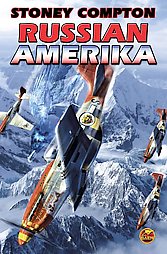 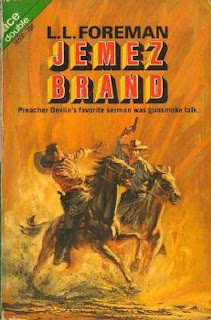 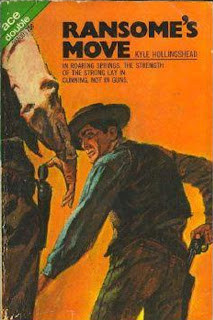 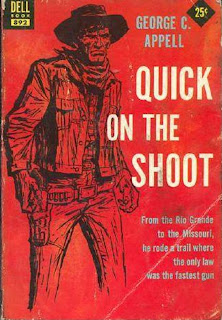 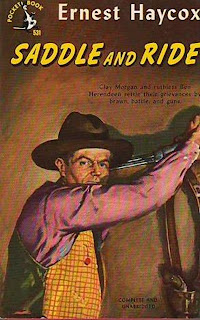 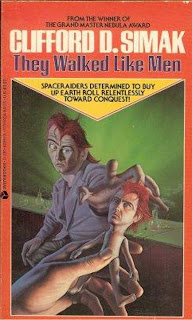 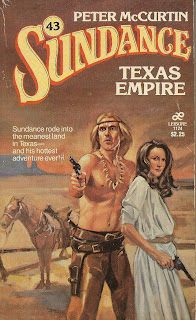 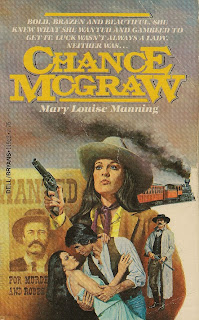 Nice haul! We never see places like that around here any more.

Of course, Krakatoa is actually west of Java, a fact which the filmmakers didn't discover until after they'd hyped their dumb movie under the original name endlessly.

Sorry, I mean it is EAST of Java, not west like the title has it.

Nice haul, indeed, James ... Just remember the mantra: "You can never have too many books" ... I'm not familiar with many of the titles, but KRAKATOA was actually pretty good (as a book) and I know from talking to Avo that it was one of his favorites. I also know this will probably draw some of the usual Avallone cracks, but here was another case where (like STATION SIX - SAHARA) Mike wrote a far better book than the movie it was based on ... Also, don't be fooled by any negative comments on the later Drake ("the man with nobody's face")books by Dan J. Marlowe - They're a *departure* from the darker, more noirish crime novels that started the series, but they still are plenty darn entertaining. And Hazel, Drake's big red-headed girlfriend, is a nice added touch.

Good selections. I'm surprised you've not been to the Half Price on Northwest Highway more than once before. When I lived in Frisco and later Commerce, I would often spend a Saturday hitting as many of the Half Price stores as I could, but the one on Northwest Highway was always the best. Now that I'm out in West Texas, I don't get there much, but if I'm in the Dallas area, I try to stop in.

Great buy, Mr. Reasoner! I recently bought THE VENGEANCE MAN by Dan J. Marlowe who I will be reading for the first time. What do you think of him?

I had the impression that all the Earl Drakes after ONE ENDLESS HOUR were thief-turned-spy capers. I recently picked up the next-to-last book in the series, OPERATION DEATHMAKER, and darned if it wasn't a hard-edged kidnap yarn, with Drake using his skills in B&E in a race against time to save Hazel's niece. Not a spy in sight. It wasn't up to NAME OF THE GAME, ONE ENDLESS HOUR, VENGEANCE MAN, or STRONGARM, but it was closer to old school Marlowe than I expected. Two Noel Loomis GMs, HANG THE MEN HIGH and THE MARIPOSA TRAIL, are on my imminent-reads pile.

Fred, I thought the same thing about the Earl Drake books, but taking a closer look at the two I bought, it appears that OPERATION WHIPLASH may be a straight crime novel, as well. I'll find out sooner or later when I get around to reading it.

Prashant, I like everything I've read by Marlowe, but that's only a handful of books so far. I haven't read THE VENGEANCE MAN, but it has a great reputation.

Keith, I'm hardly ever in Dallas, but now that I know my way around a little better, maybe I'll venture that way more often. I'm not a fan of traffic, and one day last week as I was sitting there on the freeway at a standstill, I realized that I can get from my house to Cross Plains just about as fast as I can get from my house to the hospital in Addison where Joanna was. Which is just crazy.

Reading about your haul got me thinking about my next trip to the Twin Cities in June for baseball and books. There are several Half Price stores in the area and I usually have time to visit three with the one in St. Paul my favourite. My first stop always is the $1-2 section and then the collectibles. I keep hoping to find The Name of the Game is Death and John D. MacDonald's Weep For Me.

Enjoyed the entire Earl Drake series, which all had such great covers! Nice haul, James. The only Half price I've ever been to is the one in Cedar Rapids, Iowa. Wish there was one closer.

What a bonanza! It's been a long time since I scored books of this kind of quality!