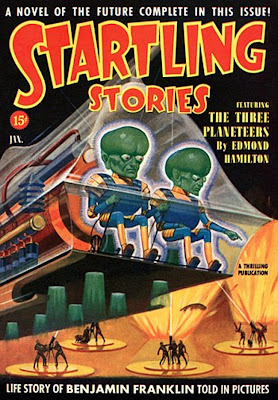 I grew up reading science fiction from the so-called Golden Age, a time when rocket ships had fins, were armed with atom-guns, and were navigated with the help of electronic brains powered by vacuum tubes. I still have a great fondness for that era and revisit it from time to time. Edmond Hamilton's THE THREE PLANETEERS is a prime example of good swashbuckling adventure SF.
Originally published as a full-length novel in the January 1940 issue of the pulp STARTLING STORIES, other than the name this novel doesn't seem to be inspired by or bear any resemblance to Dumas's THE THREE MUSKETEERS. Instead, it's the story of three space outlaws who are notorious throughout the solar system, Earthman John Thorn, Venusian Sual Av, and Mercurian Gunner Welk. All of the planets in the system except Pluto have been colonized by Earthmen, but over the centuries the inhabitants of each planet have developed their own characteristics due to variations in the atmosphere on the different planets.
As the story opens, civil war is looming between the four inner worlds of the and the four outer planets, now known as the League of Cold Worlds. The Three Planeteers are caught in the middle of it because (minor SPOILER just ahead, but it's revealed almost right away and it's nothing you won't have guessed anyway) they're not really outlaws, they're actually secret agents working for the good guy . But their reputation as brigands allows them to infiltrate the Zone, the area of Saturn's rings where a society of pirates has grown up. You see, the leader of the pirates is a beautiful young woman whose late father possessed the secret of the tenth planet Erebus, where an element that can be used as the power source for a mysterious weapon that can save the is located. The Planeteers' job is to get the secret of Erebus from the girl, travel there and bring back the power source, and prevent the League of Cold Worlds from taking over the solar system.
And this is all in the first couple of chapters.
If you've read this far, you probably know whether this is the sort of over-the-top yarn that appeals to you. I loved it. really piles on the death traps and ray-gun battles and wide-scale outer space adventures involving vast armadas of spaceships. He was mighty good at that sort of stuff, too. Everything is big in an Edmond Hamilton story, at least from this stage of his career. He wasn't known as the World-Wrecker for nothing.
But there's some decent scientific speculation in here, too, especially after our heroes reach Erebus and find something they're not expecting at all. Sure, the science is dated and wildly inaccurate, but was trying with what he knew at the time, and that's all you can ask of an SF writer.
I don't think this novel was ever reprinted, but there's a new e-book edition of it available now, and you can get it here for a very reasonable price. I enjoyed THE THREE PLANETEERS, and if you have a taste for Golden Age science fiction, you might, too.
Posted by James Reasoner at 6:00 AM

STARTLING STORIES is a big favorite of mine and it is still possible to obtain all 99 issues without breaking the bank. Not only are the stories of interest but the covers are simply great. I especially like the Bergey covers with girls fighting Bug Eyed Monsters or BEMS.

My favorite period is a little later when Sam Merwin and later, Sam Mines took over as editors, around 1946-1955.

I wonder if this will show up in Haffner Press' set of Hamilton stories, THE COLLECTED EDMOND HAMILTON?