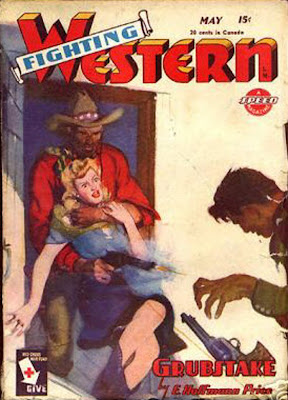 I'm not particularly fond of this cover, but this issue is of some interest anyway (at least to me) because of the featured story by E. Hoffmann Price, "Grubstake", which he expanded into a novel of the same name and sold to Zebra Books in 1979. This book marked Price's return to publishing after being out of it since the early Fifties. He went on to sell a couple of fantasy novels and four science-fiction novels to Del Rey in the Eighties. I haven't read any of them. The other authors in this issue of FIGHTING WESTERN include a couple I've heard of (and even read) Giff Cheshire and Lee E. Wells, and a couple I haven't, Charles Handley and Warren Bean. 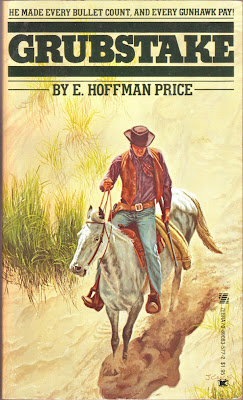 I never bothered to collect this title which according to THE ADVENTURE HOUSE GUIDE TO THE PULPS, lasted 31 issues from 1945 to 1950. Just about all the covers showed damsels in distress.

I remember E. Hoffman Price wrote alot for this publisher which also put out the Spicy and Speed titles.

Gerald W. Page gets a little credit, too...he published an original Price story in the seventh annual YEAR'S BEST HORROR STORIES a coupla years before the 1979 novel...and a damned good one, if more a grim adventure story (a la THE MAN IN THE IRON MASK or THE COUNT OF MONTE CRISTO) than horror...

I didn't know that, Todd. I may have to look for that volume. Thanks for the tip.

Argh. It's been a bad day for me. I've managed to conflate E. Hoffman Price and H. Warner Munn...the latter being the one who published such an original in FIFTH annual from Page for DAW Books...

It would be easy enough to get those two confused. Looks like a mighty good line-up in that anthology even without Price.

Well, though not as fiction writing, there was Price's (actually Price, this time!) occasional column, in the likes of Page's WITCHCRAFT AND SORCERY magazine in the early '70s and perhaps elsewhere, "The Jade Pagoda"...keeping his hand in...