I was running some errands in Fort Worth last week and managed to make a quick stop at the Half Price Books near Ridgmar Mall. This is what I came away with.
BLACK ACES – Stephen Payne. A Leisure paperback reprint of a Western novel from 1936. Payne was a prolific contributor to the Western pulps, so this novel may well have been serialized in one of them before appearing as a book.

LAW FOR TOMBSTONE – Charles M. Martin. Another Leisure reprint. Martin, who also used the by-line Chuck Martin, was an even more prolific pulpster than Payne. This novel from 1937 probably came from the pulps as well and features Martin's series character Alamo Bowie, a troubleshooter for Wells, Fargo. Buck Jones played Alamo Bowie in a movie based on this novel. (LAW FOR TOMBSTONE also appeared as an early Ace Double, along with ONE AGAINST A BULLET HORDE by Walker Tompkins. I think I have a copy of that edition, too, or at least I did at one time.)

SHARP THE BUGLE CALLS – Steve Frazee. This is a Lion Books paperback original from 1953 by a well-respected hardboiled Western author. It's not in great shape, but I've enjoyed the novels by Frazee that I've read, so I didn't hesitate to pick it up.
DIE OF GOLD – Chet Cunningham. I used to have all the books in the Jim Steel series by veteran paperbacker Cunningham. Never read any of them. But now I have this one to try if the mood strikes me.

JOHNNY CONCHO – Noel Loomis. Novelization of the Frank Sinatra movie, with Ol' Blue Eyes on the front and back covers and a blurb from him (which he probably wrote about as much as John Wayne did the blurb that ran on Louis L'Amour's HONDO for years and years).
THE KING KILLERS – Thomas B. Dewey. A private eye novel from fairly late in Dewey's career featuring Mac, his best-known creation. This is one of the few books in the Mac series that I haven't read.
I also got e-book review copies of several novels by friends of mine, and those reviews will be showing up fairly soon, I hope. I really should start listing them, too, I suppose, but I have trouble keeping up with what I got when. I think my brain is too full. Surely I could free up some space by forgetting things like who played "Lumpy" on LEAVE IT TO BEAVER. (Frank Bank, to save you a trip to IMDB. And that fact is related to a joke on the sitcom TAXI, which has been taking up still more space in my brain since the late Seventies . . .)
More covers below. 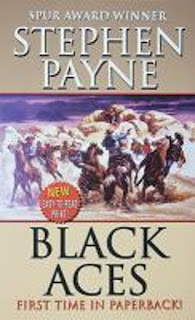 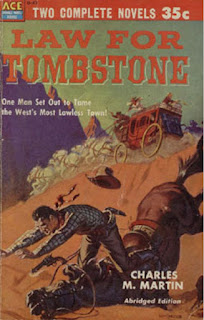 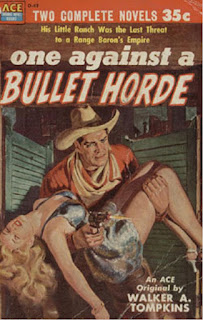 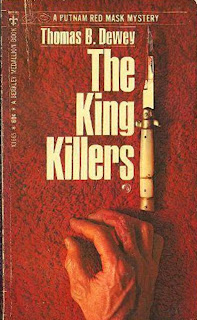 Once again, a nice score! This is the season for library book sales up here. I'm hoping to find some gold like those ACE Doubles you discovered!

I spent several months in Ft. Worth for business last year and I miss that Half Price Books near Ridgmar. I pulled some really nice books out of it.

Doesn't seem like there's much but tired best sellers of the Danielle Steele type in the library sales here, certainly nothing old and desirable. Good haul.

That's my favorite of the Half Price locations I guess because it's the closest and the one I visit the most. I also like the one in Wautauga because a friend of mine works there. (Waves to Michael.) I worked at the Half Price location that was on Camp Bowie Blvd., on the west side of Fort Worth, about 30 years ago when the chain was much smaller and much different. It was a good store, though. Directly underneath it was a basement restaurant, the Italian Inn (it may still be there, I don't know). The smell of all the food came up through the air conditioning system and made that the most appetizing smelling bookstore I've ever been in. One day the beer truck was delivering to the restaurant and the driver dropped a whole case of beer on the sidewalk right outside the bookstore's front window. A friend of mine who was a big beer drinker was in the store hanging around with me at the time, and when he saw that huge puddle spreading on the sidewalk his eyes got big and I knew there was a part of him that wanted to run out there, drop down on all fours like a dog, and go after it. He didn't, I'll give him credit for that . . . but he thought about it.

Where is the Half Price near Ridgmar, James? It used to be north of the mall, but when I went by a couple of years ago, it had moved. I didn't have time to see if it was in new a location. The one south of Hulen mall moved about a quarter of a mile further south a few years ago, and that's usually the one I stop at if I'm passing through Fort Worth these days, which sadly isn't often.

It's northeast of the mall on 183, past the big Target store and next to Petco. Sam's Club is directly across the road from it. I sort of liked the old location better because it was right next to the Chinese food buffet, so we could go there and eat lunch and then browse in the bookstore for a while. I wouldn't want to tell the HPB execs their business, but it's always a good idea to put a bookstore right next to a place to eat, and having an Arby's and a McDonald's in the shopping center parking lot isn't quite the same thing.

By the way, I like the HPB in the Hulen area, too, but I don't get over there very often because the traffic is so bad. And worse now because of all the freeway construction going on.

My parents live in Breckenridge, and when we lived in Commerce, it was usually easier to take I-20 than I-30. With B&N and Borders near HPB, that made the decision to take I-20 and stop by Hulen worth the traffic headaches. I rarely go through Fort Wroth any more since moving to Lubbock, and haven't been to HPB in Fort Wroth in several years.