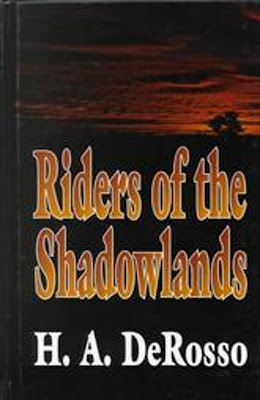 This collection of H.A. DeRosso's stories includes the following:

Like the previous DeRosso collection, UNDER THE BURNING SUN, this was put together by Bill Pronzini, who also did some minor editing on the stories. According to Pronzini's introduction, he deleted some of what he considered DeRosso's overwriting, but in comparing the text in this edition of "The Return of the Arapaho Kid" to the story in its original appearance in ARGOSY, which I also have, I didn't find any changes.

This is a good strong collection, with the title novella being probably the best story. DeRosso is known for the noir elements in his Westerns, and while these stories are certainly grim in places, they don't feel as bleak as some of his other work. Some of the endings are almost happy, in fact. I thought the two stories written for mystery magazines, "Dark Purpose" and "The Happy Death", were the weakest of the bunch. One thing that struck me is that on the stories that had title changes, DeRosso's original titles were better than the ones the magazine editors stuck on them. "Riders of the Shadowlands" is an especially good title, I thought, much more evocative than "I Trust My Trigger".

RIDERS OF THE SHADOWLANDS is well worth seeking out. DeRosso remains one of my favorite Western authors.
Posted by James Reasoner at 6:00 AM

I really must get around to reading more of DeRosso's work.

The cover suggests this is available as e-book but the amazon kindle store doesn't list it. Does anyone know where it is available? Thanks!

I love all of DeRosso's work, even this one which some one probably call his "inferior" stuff. But I enjoyed it, especially the title novella. I wish there was some way of finding out more about DeRosso himself. All I know is that he lived in a small town on the Iron Range in Wisconsin, delivered rural mail for extra money, and likely killed himself because of ongoing health problems when he was in his early 40's. If someone knows more, I'd sure like hear it.

Steve,
All of DeRosso's work that I've read has been excellent. I think there's going to be another collection of his pulp stories at some point, but that's still a good ways down the road.

Michael,
This is an older book, published in hardcover by Five Star in 1999 and in large print by Thorndike around that same time. The cover in the post is from the large print edition. There are several copies of the Five Star edition available on ABE for less than $5 including shipping, but they're not exactly plentiful. As far as I know, an e-book edition doesn't exist, and I don't think Leisure reprinted this one in paperback, either, as they did many of the Five Star and Thorndike Westerns.

Pete,
That's about all I know, too.

I read the Five Star collections after seeing that Pronzini called him the Cornell Woolrich of the westerns, or something to that effect, and agree with all here that Derosso penned some wonderful, dark tales. The ones I read were borrowed from the library; I still kick myself for not getting the Five Star HCs for my collection when they were cheaper and more plentiful (unless one wants ex-library).

I've been collecting a lot of ex-libs, since I want the fiction (preferably without too many mystery stains) more than I want a pristine artifact, and this is now one that I want...

You mentioned DeRosso to me a few months ago and I've been meaning to read him ever since. This seems like a good place to start.