AMERICAN ASSASSIN, Vince Flynn – The first of the prequels to Flynn's popular Mitch Rapp series. I've read one of the books set later and thought it was okay. 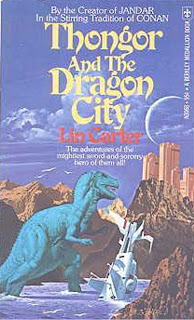 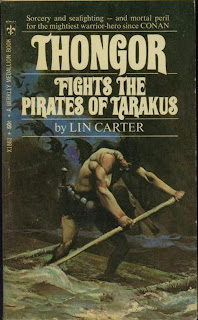 THONGOR AND THE and THONGOR FIGHTS THE PIRATES OF TARAKUS – Lin Carter. I used to like Lin Carter's books when I was a kid, but the last time I tried to read one I found it pretty tough sledding. Still, these hold some nostalgia value for me, because I remember reading some of the Thongor books when I was staying at my aunt's house. Maybe I'll enjoy them if I'm in the right frame of mind. 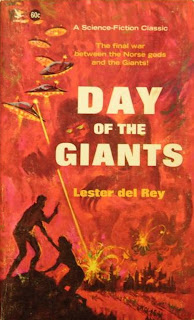 DAY OF THE GIANTS – Lester del Rey. This is one of those Airmont science fiction paperbacks we used to buy through the schools. I'm not a big Lester del Rey fan, but I thought I'd give it a try. It was originally published as "When the World Tottered" in the December 1950 issue of the pulp FANTASTIC ADVENTURES.
RIM OF THE DESERT – Ernest Haycox. This is an abridged paperback edition of a novel originally serialized in COLLIER'S as "The Drifters". When I got this one home and looked at it, I realized that the print is so small I may never read it. But who knows, I might. (One more reason to love e-books: adjustable print size.)
SIX WAYS OF DYING – Lewis B. Patten. Might be good, might not. You can never tell with Patten. But when he's good, he's really good. The more I think about it, the more I believe I may already have a copy of this book. But for 50 cents, I wasn't leaving it there.
THE DRY GULCHER – Wayne D. Overholser. I'm not an Overholser fan, but I'll give almost any Western novel a try and I'm pretty easily won over. This is a book from fairly late in Overholser's career, a paperback original from 1977.
THE MONTANANS – Bill Pronzini and Martin H. Greenberg, eds. Part of the Best of the West series of anthologies put together by Pronzini and Greenberg. These are consistently very good and always contain a nice mixture of old and new stories. Authors in this volume include Norman A. Fox, Dan Cushman, W.C. Tuttle (good ol' Tutt!), T.V. Olsen, Les Savage Jr., and Ed Gorman. 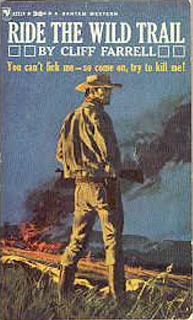 RIDE THE WILD TRAIL – Cliff Farrell. Farrell wrote Westerns for 50 years. Some I've liked, some I haven't, but generally he's a pretty good author. This one's from 1959, a little past midway in his career. I think maybe I read it back in the Sixties, but if I did I don't recall a thing about it other than the title. And I could easily be wrong about that.
GUNSLINGER'S SCALP – Kit Dalton (Chet Cunningham). A "Giant Special Edition" in the long-running Adult Western series. From what I've read of them, the early books in this series, actually written by Mitchell Smith under the name Roy LeBeau, are much better than the later ones under the Kit Dalton name. Not only does the author and pseudonym change, but so does the main character, from Buckskin Frank Leslie to his illegitimate son Lee Morgan. The later books are okay, just not up to the same level as the early ones. (And as a side note, "Lee Morgan" is not only the main character in this series, it's also the house-name on the McMasters series published by at roughly the same time Leisure was publishing Buckskin. I was "Lee Morgan" on the second book in that series, SILVER CREEK SHOWDOWN, one of my goofier efforts.) 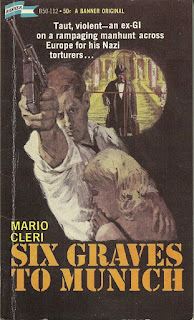 SIX TO – Mario Puzo. Originally published by Banner Books under the name Mario Cleri in 1967, pre-GODFATHER, this is an espionage novel about a former GI trying to hunt down the Nazis who tortured him in a POW camp. Cleri was the name Puzo used on the many stories he wrote for men's adventure magazines such as MALE and STAG. That fact, along with the presence of Nazi torturers in this book, makes me suspect that it's an expansion of a story Puzo wrote for one of those magazines, but I have no real evidence that's true. Copies of the original edition are pretty expensive these days. What I have is a 2010 trade paperback reprint.
WITH THE OLD BREED – E.B. Sledge. I'm putting together a nice little collection of World War II memoirs. This one about Marines fighting in the Pacific has a good reputation and was one of the books on which the mini-series THE PACIFIC was based. (I have the DVDs of the mini-series, by the way, and hope to watch it soon.)
Posted by James Reasoner at 6:00 AM

Nice haul. When will you find time to read all that?

Ha! That's the question, all right. Some of it I plan to read pretty soon, the others fall into that nebulous "someday" category.

"Someday" is my mantra for many of the books I have bought, as well as for the zillions more I want.

You never regret the books you buy . . .

I've read a ton of World War II memoirs; there are a lot of great ones. But I'd rank "With the Old Breed" at the very top.

My someday category has its own room now. And it's begging us to knock a wall down.

Nice, James, nice. I've cut way back on buying more books, but a couple did slip in this week. Not as many as used to, and not nearly as many as you, but a few. I really like the look of some of the things you got this time. I've never read those Thonger books, nor the Carter, nor any of the westerns... so much out there!

I still enjoy the Thongor novels, but I do have to be in the proper frame of mind. I think the six Thongor short stories, however, to be some of Carter's best work, much more Robert E. Howard pastiches with little of the Barsoom influence that shows up in the novels. They can be found in numerous collections, though so far no one has ever put them all in one volume, which is a shame.

Some damn fine reading there.

I'll agree with Charles. The Thongor books are entertaining, but "right frame of mind" is crucial. A little REH, a little ERB, the Thongor novels are definitely pastiches, but I find them fun regardless.

I've always viewed Lin Carter as less of a serious author and more of a fairly talented fan-fiction writer who managed to get published because he was a very good editor of anthologies and so forth. Carter had a great love of the Sword & Sorcery genre, and while I think he couldn't rise to the level of his heroes in the genre, he put a lot of excitement and, for lack of a better word, love into his works.