Tuesday's Overlooked Movie: Good for Nothing 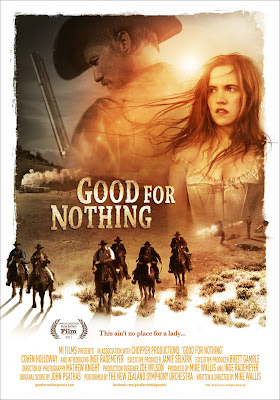 Sometimes a movie will come out of nowhere and surprise you with how good it is. That's the case with this one, which I'd never heard of. GOOD FOR NOTHING is a Western made in by people I'd never heard of, either. It opens with a recently orphaned young English woman, Isabella Montgomery, traveling to her uncle's ranch in where she's going to live.

Before she can get there, however, she's kidnapped by an outlaw who remains nameless throughout the film, an homage perhaps to Clint Eastwood's Man With No Name, since there's a lot in this movie that seems to be influenced by Sergio Leone's films.

Isabella's captor intends to rape her, but he's prevented from doing so by a plot twist I don't recall ever encountering in a Western before. Then she falls into the hands of some men who are even worse than the outlaw, and he becomes her rescuer rather than her kidnapper. Both of them are then fugitives, as they're pursued by a group of gunmen bent on revenge.

GOOD FOR NOTHING follows this classic chase scenario to its satisfying conclusion. Along the way there are plenty of well-staged action scenes, great scenery and photography, a fine musical score, and some touches of offbeat humor. Returning to the "out of nowhere" category, Inge Rademeyer, who plays Isabella, and Mike Wallis, who wrote and directed the film and produced it with Rademeyer, are partners in a digital animation company that worked on the special effects for the Lord of the Rings movies. GOOD FOR NOTHING is the feature film acting, writing, and directing debut for them. Cohen Holloway, who does a great job playing the outlaw, is a New Zealand TV actor, obscure to me (probably because I don't live in ).

But there's nothing in the background of these people to indicate that they should be able to say, "Hey, let's go make a Western", and do such a fine job of it. My hat is off to them, and I'll definitely be keeping an eye out to see what they do in the future. In the meantime, if you're a fan of gritty, hardboiled Westerns, GOOD FOR NOTHING (which is even a great title) gets a high recommendation from me.
Posted by James Reasoner at 6:00 AM

Well, westerns will arise where they will. Kiwesterns were almost inevitable, I'd guess. (You definitely have me wondering about that first unique twist.)

The twist is about as unique as they come. I picked this up at Red Box, thought it would be another one I could only get halfway through, but saw the entire thing and really enjoyed it. There are so many bad movies out there, this was a nice surprise. I turned off Ghost Protocal 20 minutes in. Same old fast-jumping crap!
Good For Nothing is slower, in a good way, and pretty damn riveting.

It does sound good. I like movies set in Australia. It find of serves well for the American west too if they can keep those kangaroos out of the shot.

The trailer makes this one look very appealing. My estimation of New Zealand "westerns" jumped up after seeing TRACKER a while ago. The storytelling and attention to detail in that movie were exceptional.

Although it was filmed in New Zealand, this one is set in the American West.

Pete, as we were watching this Livia and I both commented that we thought it was one you would like. Glad to see we were right.

Sounds great to me. I'll look for it at the video store next time I am there.

Cohen Holloway had small parts in Taika Waititi and Jemaine Clements (Flight of the Conchords) film Eagle vs Shark, and also a film currently doing the indie rounds in the US, Boy.

No reason why westerns set in the 19th century American West can't be shot in New Zealand. The country has a huge variety of scenery and an absence in large part of modern "development" -- power lines, air force bases, and the like. Many years ago, when a movie of my book The Outlaw and the Lady was mooted, part of the reasoning was that some of the Southern Alps could double for the Colorado Rockies. I've lived in NZ for many, many years now and although I don't know the people involved here, I do have a great deal of respect for the capabilities of NZ film-makers in general. But then so does much of the Hollywood establishment these days!

Yeah, when I was watching the movie I thought that it might be hard to find that many sweeping vistas in this country with no sign of anything modern.

This finally arrived from Netflix last week. I've watched it, thrilled to the score (this film NEEDS a soundtrack album release!), and REALLY enjoyed the performances of the two leads. The cinematography really worked as the landscapes and scenery of New Zealand fit perfectly into the Western mold.

I won't spoil it here either, but as for the twist . . . I did struggle with it a little bit. I mean, it's definitely unique, and I don't think I've ever seen it in a Western or any other genre for that matter, it did seem to make light of . . . hard to dance around this w/out spoiling, but I had a hard time sympathizing with the kidnapper given what his intentions were, and I felt the Stockholm syndrome-ing wasn't very believable . . . as well acted as it was.

While I don't think this is something I'll go back and watch again, I am glad I checked it out. Like I said, the score was AMAZING, and if Inge Rademeyer wants to spend any more time in front of the camera, I'll definitely check out her future work!