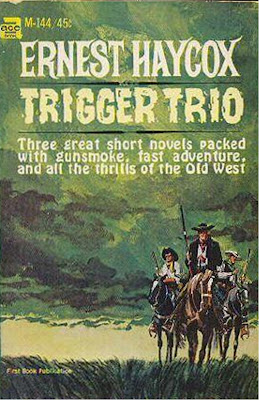 I've never been as big a fan of Ernest Haycox's work as some people are. He's very highly regarded as a Western writer, though, to the extent that when the Western Writers of America was formed in the early 1950s, there was some discussion of naming their annual awards the Ernest Haycox Awards and giving out statuettes to be called "Ernies", the same way the Academy Awards had become Oscars. That never came about (some of us would say thankfully) and WWA's awards were dubbed the Spurs.
My complaints about Haycox's work center around two things: he sets up confrontations between the heroes and villains and then goes to great lengths to postpone those confrontations, and then when the action finally can't be put off any longer, most if not all of it takes place "off-screen". I can see stretching out the suspense by bringing the action right up to the point of gunplay and then defusing the situation temporarily, but only if eventually the reader gets a suitable pay-off for all that teasing. All too often in Haycox's fiction the only pay-off is characters standing around talking about what happened that we didn't get to see.
All that said, there are some things that Haycox does very well. His characters are well-rounded and believably human, his plots are usually interesting, and his prose is very smooth, not surprising from an author whose greatest success came in the "slicks", most notably COLLIER'S. There's enough to like in Haycox's fiction that from time to time I get the urge to read some more of it, maybe in the hope that I just haven't found the right books and stories yet, the ones that will really resonate with me.
TRIGGER TRIO is a nice little collection published by Ace in 1966 that brings together a couple of novellas and a novelette from Haycox's pulp days.  The novellas are "The Octopus of Pilgrim Valley", originally published in SHORT STORIES, , and "Ride Out!", from the issue of WEST.  Rounding out the volume is the novelette "The Fighting Call", originally published in COWBOY STORIES, January 1932. 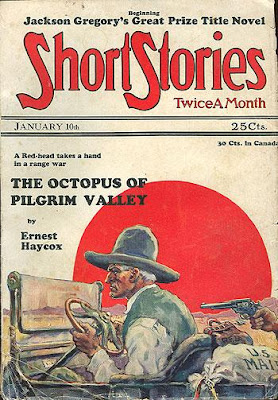 "The Octopus of Pilgrim Valley" is the longest of the three yarns, almost a full-length novel. It starts out as the story of a gallant cowboy riding into a valley and saving the smaller ranchers from an evil cattle baron. But then Haycox inserts a nice twist in the plot, as it turns out that the cattle baron may not be so evil after all and everything is not as it seems in . And when the final showdown comes, Haycox doesn't cut away from it. The gunfight isn't a particularly good one, mind you, but at least he tries. 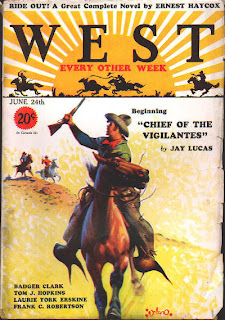 "Ride Out!" is even better. Once again Haycox starts out with a fairly standard plot, that of the new schoolmarm arriving in a Western town and a couple of cowboys vying for her attention. The first twist is the inclusion of political conflict between two factions in the county, and then the story becomes something else entirely. Haycox doesn't hold back on the action in this one. We get a jailbreak, several gunfights, and a long, brutal fistfight that reminded me of some of the epic slugfests in various Louis L'Amour novels. Haycox isn't as good with the action scenes as L'Amour, mind you, but it's still a good battle. This is certainly one of the best Haycox stories I've read so far.
The novelette that rounds out the book, "The Fighting Call", is also a good one, although the relative thinness of its plot – a drifting cowboy finds himself in the middle of a violent feud between two families – keeps it from being quite as good as "Ride Out!" Again, though, Haycox doesn't shy away from the action, and the final showdown is a good one, if a little rushed.
Overall, TRIGGER TRIO is the best Ernest Haycox book I've read so far, although I suspect his most ardent admirers prefer his novels and his more low-key short stories to the pulp powder-burners reprinted here. You know me, though; I'm as pulpish as they come. And I enjoyed this volume enough that I'll definitely read more of Haycox's work. Possibly even fairly soon.
Posted by James Reasoner at 6:00 AM

I've heard of this but haven't read it. I'm sure I'd love it as much as you.

I've seen Trigger Trio, but never bought it. I'll pick it up next time I see it!

Since I collect SHORT STORIES and WEST, I've read quite a bit of Haycox's pulp work. These two titles were his main market up until he broke into the slick magazines. He was a master of the 30 to 40 page novelet length. Unfortunately he died at an early age, only 49 or 50.

The upcoming issue of BLOOD N THUNDER MAGAZINE will have part one of a long major article on WEST MAGAZINE. Ed Hulse, the editor and publisher, has been busy reading back issues of WEST when it was published by Doubleday back in the 1926-1935 period.

For many years I used to own the SHORT STORIES cover painting that is shown above. When I bought it in the 1980's I only paid $500 for it. Now these paintings sell for alot more.

I own this book and totally agree with your opinion of "Ride Out." It's an outstanding Western short story with depth and nice imagery.

I enjoyed the "The Fighting Call" perhaps a little more than you. It's a very well contained little story.

"The Octopus of Pilgrim Valley" is also quite good, although it takes a while for things to get moving.

Not being a writer, I've never analyzed Haycox's stories as you have, but I'm definitely one of those readers who loves the stories he wrote for the slicks. I just read Bantam's collection, "The Best Western Stories of Ernest Haycox," most of which are reprints of Colliers stories, and loved every word. To each his own, as the saying goes.

This is tempting, and I surely do like the cover!

Why do you suppose Haycox returned to that structure repeatedly?

I imagine it was just what he was comfortable with. Goodness knows I have certain plot elements and bits of business that I've used over and over again. I think most prolific writers do. Haycox didn't turn out nearly as much work as some pulp authors, but he still kept pretty busy.