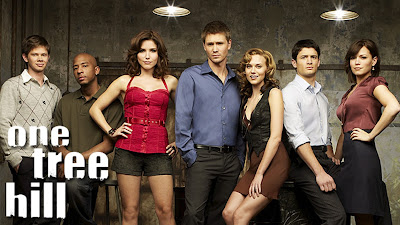 I've made a few passing references on the blog to my fondness for the TV series ONE TREE HILL, but since it's ending its nine-season run tomorrow night, this seemed like an appropriate time to write a full post about it. And I think it qualifies as overlooked, too, since it's been on the verge of cancellation probably more times than any other series that's managed to hang around for nine years. It's a prime example of a series that prompts people to say, "Is that show still on?"
Mock me if you will, but I love this show.
It started out as a fairly standard, angst-heavy, teen-centric nighttime soap opera about a small town in either South or , I never can remember which. The main characters were Lucas and Nathan Scott, half-brothers who hated each other even though they played on the same high school basketball team. Their father, car dealership owner Dan Scott, married Nathan's mother and raised the boy in wealth and comfort, although Dan made Nathan's life a living hell by pressuring him to be a great basketball player. Meanwhile, Lucas was raised by his struggling single mother Karen and ignored by his father. Throw in a bunch of classmates, high school romances and rivalries, and some soap opera among the adult characters, too, and that's the basic set-up.
But then . . . but then things start to get weird. Not in a paranormal sense, but in the plotting. Yeah, 95% of the time it's still a soap opera, but that other 5% includes some jaw-dropping plot twists that I never expected, even though they were set up fairly. It's really pretty difficult for Livia and I to be surprised by anything on TV, but probably a dozen times each season while watching ONE TREE HILL, we'd look at each other and one of us would say, "Huh. Didn't see that coming." I'm talking about some truly bizarre stuff, too, but somehow it worked in the context of the show. There's also a lot of unexpected humor, with a number of throwaway running jokes that lasted a season or more.
The whole thing was helped by a great performance from Paul Johansson as Dan Scott, who was one of the most evil, hated villains I've ever come across in a TV show. At one point he even murders a close relative in cold blood. The rest of the cast was good, too, but Johansson was a dominant force.
Then after four seasons it looked like the series would be cancelled, so creator Mark Schwan wrote a very effective series finale which took the teenage characters to the end of high school. If it had ended there, ONE TREE HILL would have been a fine series.
But it got a reprieve and came back the next year, and Schwan took the gamble of jumping the storyline ahead four years, to the point where the central characters were out of college and starting their lives as young adults. (To be fair, all but one of them were playing quite a bit younger than their real age, anyway, which is pretty common on TV shows featuring teens.) The plots featured even weirder twists (one classic involving a dog and a heart transplant) and started down the intriguing path of trying to achieve a measure of redemption for convicted murder and uber-villain Dan Scott. It was an interesting two seasons . . . and then it looked again like the series would be cancelled, so Schwan wrote an excellent series finale with a number of the characters getting some closure on their storylines and others leaving.
Then wouldn't you know it, the show came back again. The characters who had left were still gone, but new characters came in to replace them. It was still an entertaining series, but less weird, and as the characters became more successful, the blue-collar appeal of the early years (when car salesman Dan Scott was the richest, most powerful character) became diluted. It didn't help that Johansson as Dan was written out of the show for long stretches. At the end of the eighth season, renewal looked highly unlikely, so Schwan wrote yet another effective series finale.
And then the network asked everybody to come back for one more, shortened final season that really and truly would bring ONE TREE HILL to an end.
For the most part, it's been a great comeback, too, very dark, twisty, and filled with action. Paul Johansson as Dan Scott was back full-time and thoroughly dominated the plot as he continued his journey to redemption from his evil past. As one fan put it, he went from the most hated character on the series to the most loved, and speaking as a writer, orchestrating something like that has got to be really hard to do. So now there's one episode left, and I fully expect Mark Schwan to come up with a great finale, just as he's already done three times during the life of this series.
Okay, by now I expect you all think I'm crazy. I never would have figured that I'd love this series as much as I do. But sometimes things come at you out of nowhere and resonate more than they seem to have any right to. DVD sets of the first eight seasons are cheap and easy to come by. I see them at Half Price Books for five bucks, sometimes less. If you're ever in the mood for something different, give the first season a try. Stick with it a while to let the plot twists start cropping up. Maybe you'll hate it. Probably you'll hate it.
But just maybe you'll be like me and find yourself really enjoying a series you never thought you would.
Posted by James Reasoner at 6:00 AM

Yeah, I gave up on it pretty quickly in the first season, though I think almost everyone was amused by the dog in the hospital and the fate of the transplant heart...DALLAS never managed anything quite as intentionally goofy as that. (The mocking clip show THE SOUP eventually set aside a recurring segment for telenovelas and ONE TREE HILL.) I preferred EVERWOOD among those of its vintage that were soapier than they really needed to be, but OTH certainly has been less underachieving than PARENTHOOD.

I've highlighted the Go! Team over the weekend on my blog, and there was a brief mashup meme of setting OTH clips to their early hit "Huddle Formation"...results still visible on You Tube.

The rest of the family watched EVERWOOD and I taped it faithfully for them for years, so I saw episodes here and there, enough to know that it was a well-made series. My daughters are big fans of GILMORE GIRLS and think I'd enjoy it for all the pop culture references, and they own all the DVDs, so I may give it a try one of these days.

Aside from its other charms, GILMORE GIRLS was my methadone after ABC cut off our fix of ONCE AND AGAIN. And Disney won't even put out the third season dvds. (Can they do anything right?)

Just added it to my Netflix queue. If you rate it high I believe it is worth a look. Thanks.

I've seen those boxed sets of ONE TREE HILL at BIG LOTS priced cheap. After your fine review, I'll start buying them.

Rick and George,
Both of those are good options. You ought to be able to tell within a disc or two whether or not the series is something you'd like.

I like this show too, and would probably watch it if I didn't get made fun of by my wife. As it is, I only watch an episode rerun once in a while during the day if I happen to be home and Lana is not. Yes, I am a shameful coward. :)