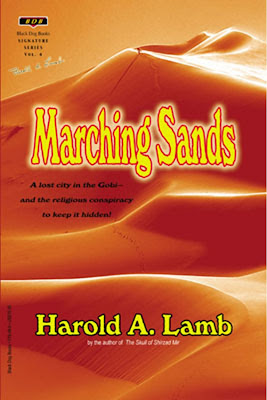 I haven't read a lot of Harold Lamb's work. The novel DURANDEL and a few short stories, that's all I remember. But I've just read his early novel MARCHING SANDS, which was serialized in the pulp ARGOSY in October and November 1919, and enjoyed it quite a bit.

I'm a sucker for lost race and lost city stories, and MARCHING SANDS is both. Former army captain Robert Gray is hired by an American scientific society to lead an expedition into the wilds of the Gobi Desert, in the hope of finding a mysterious lost race called the Wusun, who supposedly live in a city known as Sungan, which may or may not have been swallowed up by the shifting sands of the desert. A British expedition is searching for Sungan and the Wusun at the same time, and the Americans want Gray to get there first, even though there's really nothing at stake but prestige.

The Chinese authorities have their own reasons for wanting both expeditions to fail, so Gray finds himself in all sorts of trouble once he sets out for his mysterious destination. There are lurking killers who can handle rifles but leave tracks in the sand like wild camels.  There are knife-wielding priests.  There are supposed allies who may be waiting for the right moment to betray him.

And then of course, there's a beautiful redheaded girl, the niece of the explorer leading the British expedition.

This is an old-fashioned high adventure novel, the sort of thing that H. Bedford-Jones wrote so well. Lamb's writing isn't as polished as that of HB-J, at least at this stage of his career, but MARCHING SANDS is still a very entertaining yarn. Robert Gray is a likable hero, Mary Hastings (the beautiful redhead) is a fine heroine, and the scrapes they get into are frequent and exciting. Lamb does a good job of layering in the surprises in his plot and weaves everything together into a thrilling climax.

MARCHING SANDS is a little creaky in places, no doubt about that, but what would you expect in a novel written more than 90 years ago? I had a great time reading it, and it's not completely forgotten. Tom Roberts of Black Dog Books has reprinted it in both a print edition and a new e-book edition. The Amazon link for the e-book is below, and if you'd prefer the print version the best way to get it is to order it through the Black Dog Books website. I'll definitely be reading more of Harold Lamb's work.

I enjoyed all the Harold Lamb I've read. Love the cover on MARCHING SANDS! I'm going to buy this.

Lamb was the King of Adventure.

Harold Lamb is a big favorite of mine also. There are 8 big collections of his pulp fiction in paperback. His series character Khlit, influenced Robert Howard and he was one of the best authors in ADVENTURE magazine.

Speaking of Tom Roberts of Black Dog Books, I just bought THE BEST OF ADVENTURE, volume two. He also has a great collection from T.S. Stribling reprinting two long stories from ADVENTURE.