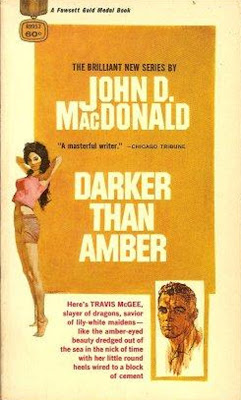 I have to cheat a little bit this week. I was going to reread this book so I could write about it intelligently, but time and real life conspired against me. I mentioned it just the other day in my final Favorite Bookstores post, though, so it seemed appropriate for John D. MacDonald Week.
As I said earlier this week, I bought this book off the paperback spinner rack at Lester's Pharmacy, walked back across the highway and up the street to my parents' house, sat down on the porch, where I did a lot of my reading, and read this opening line: "We were about to give up and call it a night when somebody dropped the girl off the bridge."
How could I not keep reading after that? Years later I read an interview with MacDonald in which he said that opening was inspired by a pulp story that got right into the action with the opening line, "I dropped to one knee and fired twice" (probably a Race Williams story by Carroll John Daly). It sure worked for me, because I tore right through DARKER THAN AMBER, then went back to Lester's and bought A DEADLY SHADE OF GOLD. For a long time after that I grabbed every John D. MacDonald book I could find.
I never stole the line about somebody dropping a girl off a bridge, at least that I remember, but if you pick up a copy of LONGARM AND THE OWLHOOT'S GRAVEYARD, you'll see that the opening line is, "Longarm dropped to one knee and fired twice." I'm nothing if not shameless.
As further evidence of that, I've written an entire Forgotten Books post and said very little about the actual book. But I don't hesitate to recommend DARKER THAN AMBER. It made me a life-long John D. MacDonald fan.
Posted by James Reasoner at 6:00 AM

I found one of the Travis McGee books after being discharged from the Air Force. I had a few months before starting school on the GI Bill and spent that summer reading all of them published to that time. With each new publication I snapped it up immediately and sat down to read it as soon as I got home. He was a great story teller and I thoroughly enjoyed every one of Travis' adventures. What a great character.

That's my favorite opening line in all MacDonald's books.

Agreed. It was the first MacDonald I read too and a great one.

Funny how we so vividly remember our "first" book in what then becomes a favorite series. BRIGHT ORANGE FOR THE SHROUD was my first MacDonald/McGee and, while it didn't have as captivating an opening, it still hooked me into loving and devouring every McGee I could get my hands on after that.

Is there a bad Travis McGee book? I don't think so, although old Trav sure seems sexist by today's modern standards, or mysognistic.

I could have sworn that first line was the first line from The Deep Blue Goodbye, but I don't suppose it matters. I remember the first line as well. The Green Ripper is one of my favorite McGees.

MacDonald was fantastic. I need to block time to go back and finish the McGee series. I'm about halfway through, reading them in order.

The first line in a novel is key element in whether the reader keeps on reading. JDM was a master of grabbing a reader and not letting them go.

JDM once gave a semi-joking answer to the question "how do you handle a passage of description in a story?" with "I kicked open the thick mahogany doors to the library and shot the fat man in the face. He slammed back into a complete set of Dickens, cracked his dead skull against the french doors, slid slowly down the plush velvet curtains and landed on the parquet floor in a puddle of his own blood." Or something like that, I'm writing from memory.

I've quoted that line many times when people ask me what my favorite opening line from a book is. My first MacDonald was A Tan and Sandy Silence, and I did the exact same thing as many of you and read the others just as fast as I could get my hands on them.

My first was A Tan and Sandy Silence as well, but after just one other, I went back to the beginning and bought and read most of them. They were readily available in paperback then, and I wish I had bought the whole set, but I didn't have the money, of course. Darker Than Amber is the next book in my re-reading of the series, and the reminder of that opener has me eager to take it off the shelf.

My first was ONE YELLOW FEARFUL EYE. And in a Gunsmith I once used the opening line "Her name was Lola, she was a showgirl."