Tuesday's Overlooked Movies and TV: The Sons of Hercules 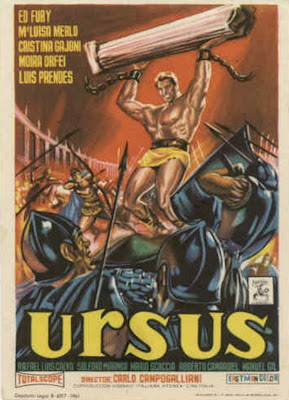 I think I saw one or two of these.

Judy and I were just married and living in Denton while I went to North Texas when Channel 11 was running these. That was in the day when Channel 11 was a independent channel. We saw all of these. The channel also ran all the Lemmy Caution movies with Eddie Constantine. Saw all those, too.

Should've mentioned that we saw all these on our little 19-inch B&W TV set.

Man, that theme brings back the memories.
But it also makes me realise that I have many things left to do with my self.
For instance, I do not believe I have, at any point in my life, "thundered through the years". Nor have I turned my dreams into history, nor, to my knowledge, have I ever "took the world and shook the world".
Man, I gotta get busy.

Bill,
I watched all those Eddie Constantine movies, too. Wouldn't mind seeing some of them again, but they don't seem to be on DVD.

You couldn't beat Channel 11 for movies.

John,
I think my thundering days are over.

How campy those things are today, but when I was in the Army the Post Theaters always had one of them playing during the week. Later on in years, for nostalgia purposes, I bought the big DVD with fifty shows and actually set through them again, but they weren't the same as when I was twenty.

James, I'm sure there were more than 14 films in the package, if the syndicated bundle you saw was the same package that ran in my area circa 1966-67 as "Gladiator Theater." I recall that some of the Gladiator Theater films weren't Son of Hercules/Maciste movies. Richard Harrison, Dan Vadis, Antonio Margheriti, and others went on to make Spaghetti westerns when the Hercules cycle died. Maciste, the lead character in many of the strongman films, was a well-known hero in Italian movies, dating back to the silent film CABIRIA from 1914, but not familiar to American audiences, so bundling those films and others to tie in with the more recognized Hercules brand was a pretty good marketing idea. (I've read that the Maciste character in CABIRIA inspired D.W. Griffith to cast Elmo Lincoln as a similar big lug, The Mighty Man of Valor, in INTOLERANCE.) Mickey Rourke in IMMORTALS was the latest of the proud line of U.S. actors who have hammed it up as evil tyrants in sword-and-sandal films, following in the footsteps of Broderick Crawford in GOLIATH AND THE DRAGON and Bruce Cabot in GOLIATH AND THE BARBARIANS.

Surely somewhere in that series is BILLY THE KID VS. SON OF HERCULES. If not, there should be.

I saw all of these, too, and I agree it sure seemed like there were more than just 14 of 'em. At one point, didn't one of the networks (ABC, maybe?) run a prime-time made for TV movie starring Gordon Scott? I wanna say "Hercules and the Princess of Troy", or something like that? I recall it as actually being pretty good.
Thanks Fred Blosser for the info on Maciste --- I always wondered who the heck he was.
As far as "thundering through the years', yeah, I reckon my thundering years are past, too ... well, except for maybe when I eat Mexican food.

Used to watch those movies on Sunday afternoons at my grandparents when I was 11 or so. They were the closest thing I could find to a Conan movie. I'll direct those interested toward a blog dedicated to the sword and sandal or peplum genre.

I used to watch at my house on Sunday afternoons. Loved 'em!
Gordon Scott was one of my favorite Hercules'.

I watched them but not with the same enthusiasm as some of the above posters. The bad dubbing had me squirming in my chair. But if I was in the mood, they were okay, and the girls in skimpy togas certainly helped matters.