It looked like I wasn't going to be buying any books this week, but then I found myself in the neighborhood of a Half Price Books I don't visit very often and, well, since I was already so close . . .

PEARLS SELLS OUT – Stephan Pastis. "Pearls Before Swine" and "Get Fuzzy" are my favorite current comic strips. Even though I've probably read most of the strips in this treasury collection, they're still funny, and Pastis also provides an interesting running commentary about their creation.

HAVE SPACE SUIT – WILL TRAVEL – Robert A. Heinlein. This is an ex-lib copy of the first edition hardback, bought for nostalgic purposes and possible rereading, because it's the first Heinlein novel I ever read, back in 1964 when I was working as a volunteer in the local public library, which had just started up the year before with books donated by the people who lived in our little town. HAVE SPACE SUIT – WILL TRAVEL was one of them. I have no idea who donated that copy to the library. I never ran into any other Heinlein fans when I was growing up, with the exception of my future brother-in-law, for many years the only person I knew who even read science fiction.

THE DARK ARENA and THE FORTUNATE PILGRIM – Mario Puzo. The first two novels by Puzo. I've been meaning to pick these up and read them, just never got around to it. Now I own them, we'll see how long it takes me to get around to reading them. (No wagering.)

MISSING MONDAY – Matthew Costello. I read several of Costello's horror novels back in the Nineties and remember enjoying them very much. I never even heard of this one from 2004, though. 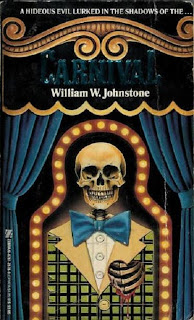 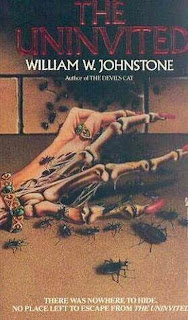 Speaking of horror . . . CARNIVAL and THE UNINVITED – William W. Johnstone. I pick up all the old Zebra horror novels I come across, especially when they're by Bill Johnstone. I'm also fond of books with a carnival setting, and one of these falls into that category. The other's a giant bug book, and who can resist those?

SLICK ON THE DRAW and DOUBLE-CROSS DINERO – Tom West. A later combined printing of two novels that were originally published as Ace Doubles in 1958 and 1960. "Tom West" was really an Englishman named Fred East who came to as a young man. I've enjoyed what I've read by him.

EAGLE MAN – H.V. Elkin. This book doesn't make any mention of it, but it's a continuation of the Cutler series that was begun by Ben Haas under the John Benteen name. I don't know if H.V. Elkin was a real name or a pseudonym.

THE WALKING HILLS – Cliff Farrell. A nice Bantam reprint of a novel originally published by Doubleday in 1962. This one features Jeff Temple, a frontier doctor who's the hero of another Farrell novel I've read, THE DEVIL'S PLAYGROUND. I don't know if there are any other books in the series.

POSSE FROM POISON CREEK – Lewis B. Patten. As with all of Patten's work, at least the potential to be very, very good. 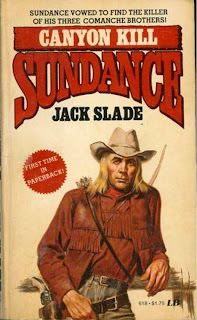 CANYON KILL – Jack Slade. Part of the Sundance series, another continuation of a series started by Ben Haas. The author behind the Jack Slade house-name on this one was Dudley Dean McGaughey, better known as Dean Owen. Should be good. 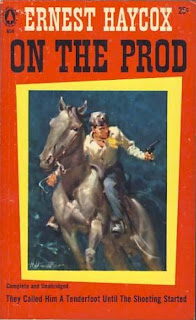 And three by Ernest Haycox: ON THE PROD (originally published in the pulp WEST in 1930 under the title "Fighting Man); DEAD MAN RANGE (also from WEST in 1930 under the title "Son of the West"); and RIM OF THE DESERT, which I bought a few weeks ago in a Paperback Library edition with tiny print; this is a Signet edition with a much more readable font. 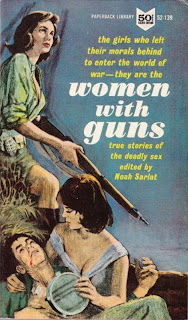 Finally a couple of book previously ordered that arrived this week, both collections edited by Noah Sarlat: COMBAT! (1956) and WOMEN WITH GUNS (1962). These are supposedly true but probably fictional war stories reprinted from the men's adventure magazines MEN, MALE, STAG, and FOR MEN ONLY. Sarlat was still editing FOR MEN ONLY in the mid-Seventies when I was trying to break in, although it was more of a girlie mag by then. I recall sending him dozens of short stories, none of which he bought. I had much more success selling to DUDE, , and NUGGET, all edited by John Fox. I sometimes wonder what happened to these guys. Sarlat may have passed away by now. Fox was a young guy at the time, like me, so he may still be around. None of us are young anymore, though.
Posted by James Reasoner at 6:00 AM

I recently, in the last few years I mean, read the Jack Slade Sundances, five I believe, and thought them pretty good. I think that's all of them now. I enjoyed the McCurtin continuation of the series, but still think Haas"s books were the best.

I read that exact same edition of Have Spacesuit from the school library when I was in 7th grade. It was the first Heinlein I ever read, as well.

Nice haul. I wish we had this chain in Michigan.

Some great book finds here. I have enjoyed reading Puzo in the past — he is such a fine writer. Puzo and Leon Uris were on my shelf for a number of years. I'm intrigued by Heinlein whom I have never read. And those old Westerns — if only I could say "energise" and transport myself into your half price books store.

I'm not talking about ROGUE, NUGGET, PLAYBOY, etc but the more sleazy examples with covers showing Nazis and pretty girls having a good time(usually a GI is getting ready to gundown the villains).

I collect them for the crazy covers(I guess WW II vets were the main readership) but I've yet to be able to read the things. Maybe you can?

I read THE FORTUNATE PILGRIM in college and really enjoyed it. I also picked up DARK ARENA recently but haven't read it.

A few of those Tom West Ace doubles are in my TBR pile, as well.

I recently reread HS-WT and enjoyed it as much as I did way back when. And speaking of second hand bookstores I had to make one final visit to the one on Savannah Hiway. After 32 years it is closing down. The loss of this favorite second hand store made our front page in the newspaper today. While there I found MEDICINE CREEK and DEATH HEAD CROSSING both by a fellow named James Reasoner. I tossed those in to my basket along with the other 30 or so books. Just thought I'd add that to the day's comments. Thanks.

I had those Johnstones in my stash up until the IRS convinced me to put them back.

Pearls, the Heinlein and Freedom line all look especially good. I have a trade edition of the Heinlein, and read it years ago as a youngster and again just a year or so ago, but it's always great to see those old Heinlein books, and what a great cover. I like Pearls Before Swine too, and might just pick this up. Freedom line sounds fascinating!

I'm curious about those Haycox novels. Since you once mentioned a few of his flaws, to which I agreed having just finished one (Can't recall the title: it was just THAT DARN GOOD!), I'm finding him wildly hit and miss.

When I was a kid, I was torn between HAVE SPACESUIT, WILL TRAVEL and CITIZEN OF THE GALAXY as my favorite Heinleins. Of course, I read all his other juveniles, but those two were my favorites.