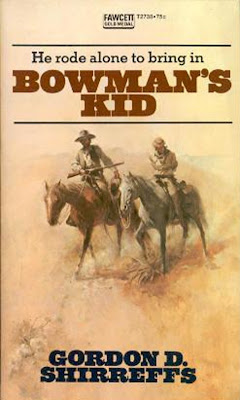 Manhunter-for-hire Lee Kershaw takes on the job of finding cattle baron Duke Bowman's long-lost son in this novel first published by Fawcett Gold Medal in 1973. Bowman is dying and wants Kershaw to find his son so that the boy can inherit the ranch, rather than letting his enemies take it over after he's dead. Those enemies, of course, want to stop Kershaw and kill the boy, if possible.
A fairly simple set-up, but in his quest to find the boy (young man, actually), Kershaw uncovers a lot of dark secrets from the past. A friend of mine who read this novel compared it to the work of Ross Macdonald, and it's an apt comparison. I've said before that I consider Walt Coburn the closest Western equivalent to Macdonald, what with Coburn's obsession with the way sins and secrets of the past inevitably surface to wreak havoc with the present. But Shirreffs also does an excellent job of exploring that theme in this novel, and he's a better stylist than Coburn, to boot. Shirreffs' action scenes are some of the best in the Western field. Also, much of this book takes place at night, something that's a little unusual in a Western. All in all, a very solid job by Shirreffs and a book well worth reading.


UPDATE: There's an interview with Shirreffs from a 1986 issue of LIBRARY JOURNAL here. I don't have access to the full article, but some of you might through your local library or academic institution. Thanks to Charles T. Whipple for the link.
Posted by James Reasoner at 6:00 AM

Oh, yeah ... Shireffs was one of the greats among Western writers and his books still hold a special row on my book shelves. Kershaw was my favorite of his recurring characters and BOWMAN'S KID was a terrific debut. Not to claim I'm anywhere near on a level with Shireffs, but my Bodie Kendrick character (from HARD TRAIL TO SOCORRO and RIO MATANZA upcoming) is admittedly strongly influenced by Shireffs and Kershaw. Anyone who hasn't read Gordon D. surely needs to track down his books --- they are top notch!

Wayne,
I can definitely see the Shireffs influence on Bodie Kendrick. I'm looking forward to RIO MATANZA. That's an excellent title, by the way.

I've read a little of Shirreffs, and have at least one novel kicking around awaiting me...thanks. In the same ballpark as MacDonald is a strong rec.

Met Gordie at WWA during the 80's. He was a helluva guy as well as a good writer. I used to have all the Lee Kershaw books. Maybe I should buy them, again.

Read and reviewed (though not as well) in OWLHOOT. I agree that it was a fine book and had me guessing just who was the real heir.