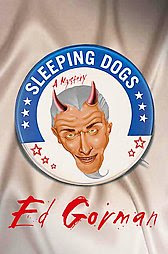 I thought for a while the other day that I was about to go into one of the dreaded reading funks, but luckily I had a sure-fire cure on hand: Ed Gorman’s new novel SLEEPING DOGS. It’s no secret that I’m biased because Ed is a long-time friend of mine, but that doesn’t change the fact that this book is an extremely fine mystery novel about the dirty tricks that go on during a high-level political campaign. The narrator is political consultant Dev Conrad, who finds himself drawn into a case involving blackmail and murder when someone tries to sabotage the campaign of the candidate Dev works for.

This is a very well-plotted book, but what makes it special is that unique Gorman voice and style, breezy and funny when it needs to be but always tinged with a touch of melancholy. The prose is clean and smooth and fast (“sleek as a bullet” I believe was the Dean Koontz quote that used to appear on the covers of Ed’s books, and it’s as true now as it ever was). This is a book that draws you in and keeps you turning the pages, and you really care about the characters, especially Dev.

Some of you may think that the lack of political content on this blog means that I’m not interested in politics, but I am most of the time, although I go through spells of ignoring it. I think political maneuvering makes an excellent canvas for fiction, though, and that certainly proves to be the case here. SLEEPING DOGS gets my highest recommendation, and I believe it would even if I’d never met Ed.
Posted by James Reasoner at 9:58 AM