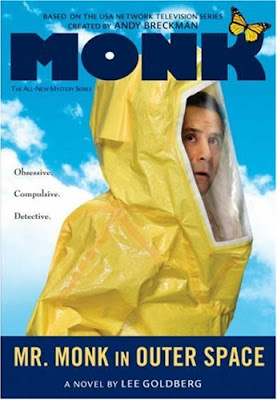 I’m biased, of course, because I consider Lee Goldberg a friend, but I think his Monk novels are some of the most consistently entertaining mysteries to be found these days. They’re tightly plotted, laugh-out-loud funny, and the voices of the various characters are as pitch perfect as they can be.

The latest book in this series, MR. MONK IN OUTER SPACE, doesn’t find Monk, Natalie, Captain Stottlemeyer, and Lt. Disher actually going into orbit. Rather, they’re trying to solve the murder of a Hollywood legend, the writer-producer who created the cult science fiction TV series BEYOND EARTH back in the Seventies. Now a new version of the series is about to be made, and the fans of the original series are upset about the proposed changes in it, so when the creator is murdered at a BEYOND EARTH convention, suspicion immediately falls on members of the show’s fandom who think that he has sold out his original vision and its followers.

Regular readers of Lee’s blog will recognize where some of this material comes from, but he’s not content just to poke affectionate fun at the worlds of fandom and cult TV series. The plot turns out to be considerably more intricate than that, and Monk has to have the help of his brother Ambrose to sort it all out.

If you’re a fan of the TV show MONK, you really need to read these books. (This is the fifth in the series.) If you’re not, you should read them anyway. MR. MONK IN OUTER SPACE gets a high recommendation from me.
Posted by James Reasoner at 9:58 PM

A fine series. His Diagnosis Murder books weren't bad either. Not to forget The Man With The Iron-On Badge.

I agree with you about the Monk books. I have enjoyed all five of them, but I think this may be his funniest so far. He does a great job with the characters and I like that he has Natalie narrating the books.

Thanks so much, James!