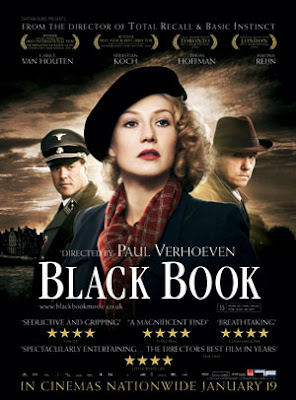 There was a time when I didn’t like subtitled movies, but after watching a lot of foreign films with subtitles when I was in college (what else are you gonna do in college?), I got to where I preferred subtitles to watching movies that were dubbed in English.

Which brings us to BLACK BOOK, a World War II espionage drama in which nearly all the dialogue is in Dutch or German. Clarice Van Houten plays a young Jewish woman who just wants to escape from the Nazis but winds up getting involved with the Dutch resistance instead and finds herself falling in love with one of the SS officers she’s supposed to be spying on. The plot twists and turns until it’s a little difficult to keep up with who’s betraying who, and along the way there’s a fair amount of fairly graphic sex and violence.

Directed by Paul Verhoeven, who made ROBO-COP, TOTAL RECALL, and BASIC INSTINCT, among others, BLACK BOOK is well-acted, beautifully photographed, and a pretty darned good film. There are a couple of clear-cut villains (and they’re really nasty, too), but most of the characters are drawn in shades of gray, neither all good nor all bad, pretty much the way people are in real life. There’s a framing sequence I didn’t particularly care for, because it acts as a spoiler of sorts, but that’s my only real complaint. This is the first movie we’ve watched in more than a month, and it’s a good one, well worth watching.
Posted by James Reasoner at 11:15 PM

Sex, violence, and a good story. I liked this one a lot.

I'll have to check out Netflix.

Another good foreign film to catch if you haven't seen it is The Lives of Others that won the best foreign film last year.

This is on my too rent list. Thanks for the review.