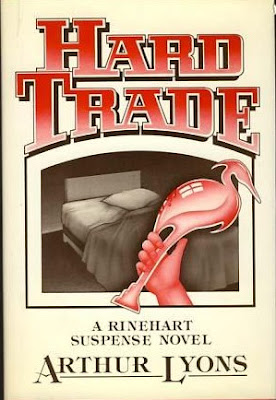 Most of you have already heard or read by now that Arthur Lyons has passed away unexpectedly at the age of 62. He was one of the best hardboiled mystery writers of the Seventies and Eighties, and his Jacob Asch novels are some of the best PI novels from that era. HARD TRADE was the first one I read, but I liked it enough to quickly track down and read the others that had been published up to that point, and I read the rest of the books in the series as they came out. If you haven’t read his work, I strongly recommend that you give it a try.

I never met Lyons, but several years ago (more like fifteen, now that I think about it), I was out running some errands one day, listening to the radio, when the host of the talk show that was on announced that the next guest was Arthur Lyons, who would be discussing his new non-fiction book on Satanism. I was in and out of the car but was able to hear most of the interview. As far as I could tell, the host never brought up Lyons’ mystery novels. I really wanted to get home in time to call in, say hello to Lyons, and tell him how much I enjoyed his novels . . . but of course the interview was over by the time I got to a phone. Just one more missed chance.

But his books are still out there, and they’re well worth reading.
Posted by James Reasoner at 11:03 PM

Actually I didn't know this until I heard it here on your blog. That's too bad.

This is sad. I loved his novels. Especially Hard Trade has a special place in my heart for personal reasons.

Never met Lyons but did speak to him on the phone. he was a member of PWA all through the 80's.

Sad news to hear. Mr. Lyons writing was so smooth and accessible -- worthy of study besides telling a great P.I. tale.