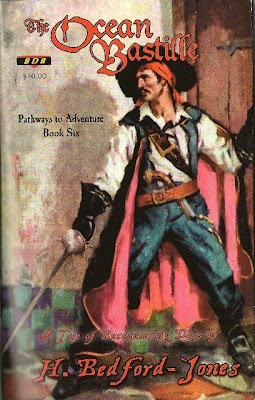 THE OCEAN BASTILLE is a chapbook reprint from the excellent Black Dog Books featuring two stories by H. Bedford-Jones, one of several authors who have been dubbed “The King of the Pulps”. (The others being Erle Stanley Gardner and Frederick Faust, aka Max Brand.) The title story, originally published in the February 1932 issue of POPULAR FICTION, is set in 1707 and concerns the efforts of a group of French-Canadian explorers and adventurers to rescue an old comrade of theirs who has been unjustly imprisoned. The man is locked up in a fortress off the coast of France that is surrounded by water most of the day, except for a few hours at low tide. I don’t know if such a prison really existed or not (given Bedford-Jones’s reputation for research, I suspect that it did), but it’s a neat concept. The story is a little slow to develop, though, and doesn’t have as much action as you might expect. I enjoyed it, though.

The other story, “The Isle of Trouble” (from MAN STORIES, June 1931), is a South Seas yarn featuring villainous copra and pearl traders, a couple of beautiful women, and the usual stalwart hero. It’s pretty entertaining, too, as one of the female characters turns out to be more dangerous and hardboiled than any of the men. I like tropical adventures like this, and Bedford-Jones was good at the genre . . . but then, he was good at just about every genre, as far as I’m concerned.

Neither story in THE OCEAN BASTILLE belongs in the top rank of Bedford-Jones’s work, but they’re fun to read and I’m grateful to Tom Roberts of Black Dog Books for bringing them back into print.
Posted by James Reasoner at 10:44 PM

This definitely looks like something I'd enjoy. I haven't read much Bedford-Jones.

I just got the Black Lizard Big Book Of Pulps and have not even begun to make a dent in that. Looks like I'll be ordering The Ocean Bastille next!

I think there is an English castle set on a penisula that is seperated from the mainland by high tide. I'm not sure whether sich a place would rate well as a prison. The waters wouldn't be deep and the harbor bottom probably not mucly enough to keep escapees from walking across to safety.