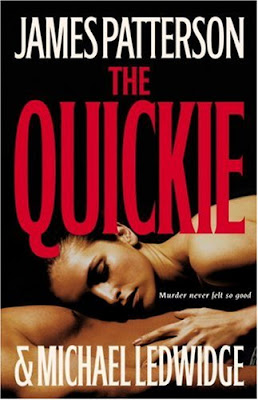 I’ve learned to keep an open mind about James Patterson’s books. I’ve tried his two popular series, the ones featuring Alex Cross and the Women’s Murder Club, and don’t care for either of them. But I’ve read and enjoyed some of his stand-alones. A lot depends on who his co-author is on a particular book.

THE QUICKIE is Patterson’s second collaboration with Michael Ledwidge. I started his first one with Ledwidge, STEP ON A CRACK, and thought it was pretty well-written, but it got derailed quickly by a really silly plot and I didn’t finish it. THE QUICKIE is considerably better. It’s about a woman who has an affair to get even with her husband for cheating on her, and in the process she gets involved with a convoluted criminal conspiracy that puts her life in danger several times. That’s about all I can say about the plot without giving away too much, because this is one of those books where nothing is what it appears to be at first, with some major twists and turns along the way. I’m a sucker for that sort of plot, so I enjoyed the book. It does stretch believability pretty close to the breaking point toward the end, but it never quite gets there.

Another thing I like about Patterson’s books is there’s very little padding to them. Everything advances the story at rocket-like speed, and with the short chapters and the amount of white space, the books really aren’t very long. As with Robert B. Parker’s books, the publisher makes them look heftier than they really are. Appropriately enough, I raced right through THE QUICKIE and had a good time reading it. I wouldn’t want a steady diet of this sort of book, but they make for a nice change of pace every now and then.
Posted by James Reasoner at 1:40 PM

I would agree that it was OK and a good read but I found it a little unbelievable. Without giving the plot away, Lauren seemed to be pretty unaware of a lot of things for someone who had the job she did.