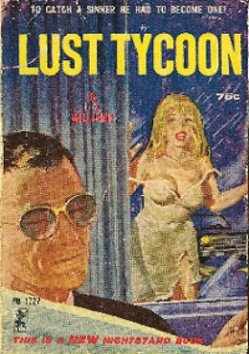 This book is almost one of those little gems that you find in unexpected places. Forget the sleaze novel trappings. LUST TYCOON is actually a hardboiled mystery yarn that reads more like a Fifties Gold Medal than a Sixties Nightstand Book. The narrator is Tom Dash, a former New York City police detective who retires because he accidentally killed an innocent bystander during a shootout with an armed robber. Dash buys a wrecked ketch, rebuilds and refurbishes it, and charters it for cruises on Long Island Sound. He’s just begun a casual affair with a beautiful young woman who works for him when she’s murdered. Dash isn’t a suspect in her killing, but when he starts investigating her death on his own, two more murders quickly follow, and the cops do think he committed those. So in classic fashion, Dash has to go on the run from the police while trying to find the real killer.

There’s nothing in this book you haven’t read a hundred times before, but whoever the real author was behind the J.X. Williams house-name, he tells the story fairly well and keeps the pace crackling right along for most of the book. There are some nice turns of phrase along the way and some decent action. The character of Tom Dash bears a certain resemblance to Lawrence Block’s Matt Scudder and Donald Westlake’s Mitch Tobin, but the writing isn’t that good. I don’t think either Block or Westlake wrote LUST TYCOON, but I wouldn’t be surprised if the actual author was published under other names, too.

Reading LUST TYCOON isn’t quite the same as discovering a previously unknown Harry Whittington or Charles Williams or Gil Brewer novel, but it’s pretty entertaining. The plot sort of falls apart at the end, as if the author couldn’t quite figure out how to wrap things up properly. I’m still glad that I read it, and if you happen to run across a copy somewhere, you might consider picking it up.

Sounds like an interesting title to read. I'll look for it. (I wonder who J.X. really was, too.)

There's also a guy who tended to splice together bits of other peoples' films who hid under the moniker, along with the various people who used it for sleazbacks. The J. X. Williams Arcive online is devoted to him...while among the luminaries not, I think, associated with the Scott Meredith Literary Agency who wrote as Williams is reputed to be PLAN 9 film-maker Ed Wood (as opposed to sf fan Ed Wood and other EWs). Certainly the no-budget filmmaker EW was a busy sleaze writer in the latter '60s, and early '70s.

As far as the books go, I believe J.X. Williams started out as a pseudonym for John Jakes, but it didn't take long for it to become a house name. Jakes was long gone from the genre by the time LUST TYCOON was published, too.