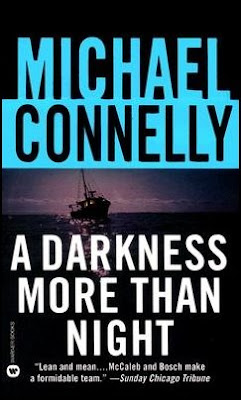 Longtime readers of this blog may recall that a few years ago, I read quite a few of Michael Connelly’s novels in a fairly short span of time, and predictably enough burned myself out on his work for a while. But I’ve continued to read one now and then, and since this is Connelly Month on the excellent Rara-Avis mailing list, I thought now would be a good time to try another.

A DARKNESS MORE THAN NIGHT is a crossover novel, pairing Connelly’s regular series protagonist, LA homicide detective Harry Bosch, with Terry McCaleb, the former FBI profiler who’s the hero of the novel BLOODWORK. It’s a natural enough move, and I thought it worked very well. I also like the way Jack McEvoy, from Connelly’s novel THE POET, makes an appearance as well. I’m a big fan of authors who try to create a consistent shared universe within their work, and with this novel it becomes clear that there are no real stand-alones among Connelly’s books. Any of them can tie up at any time with the others, and I like that. It’s also a good reason to read them in order, rather than skipping around.

(To digress for a moment, I do this myself in my own work, crossing over characters from one series and one pseudonym to another. For example, some of the characters from my Revolutionary War series PATRIOTS, written under the name Adam Rutledge, show up much later, story-wise, and play important parts in one of my Wagons West prequels written as Dana Fuller Ross. These somewhat obscure connections add some fun to it for me as a writer, and I hope they do for the readers who recognize them, too.)

But to get back to A DARKNESS MORE THAN NIGHT, nobody is better than Connelly at slowly peeling back the layers of a plot, and that quality is very much in evidence here. Unfortunately – and this is the book’s only real flaw as far as I’m concerned – the plot here winds up being a little thin and easy to figure out early on. However, Connelly’s prose is readable enough, and the characters of Bosch and McCaleb are compelling enough, to keep the reader’s interest. There’s a great action scene near the end, and as usual there are unexpected bursts of beauty and poetry in the midst of Connelly’s mostly lean, unadorned prose.

In my opinion, Michael Connelly’s first four Harry Bosch novels – THE BLACK ECHO, THE BLACK ICE, THE CONCRETE BLONDE, and THE LAST COYOTE – are quite possibly the best four-book run in all of mystery fiction. A DARKNESS MORE THAN NIGHT doesn’t rise to that level, but it’s still highly entertaining and well worth reading. I plan to read more of Connelly’s work soon, but I’m going to try not to burn myself out on it this time.

I seem to be the only one I know who thought this book didn't work from the get go: for the investigating cops to automatically suspect Bosch as a killer, without confronting him or even considering it might be a setup, defies belief. I would think the first thought would be, "He couldn't be doing this. Could someone be setting him up?" Or even, "Why would he be doing this and leaving clues that point to himself?"

To build the whole book on an investigation that I can't believe really could happen like that does me in from the start. It was the old, "Don't look at the elephant in the corner" problem for me.

Many of Connelly's books seem to have this sort of flaw. The one with the girl constantly hiding and moving through air ducts in a Vegas casino comes to mind. It's apparently not filthy dirty, big enough to maneuver in, and moving through the stuff doesn't create enough noise to attract attention.

Am I really the only one?

In my case I knew there were another half-dozen or more Bosch books after this one so it's pretty obvious that he can't be the killer, and it's true that Connelly doesn't give us any other suspects except the ones who turn out to be guilty. But even if I'd read it when it first came out I don't think I would have bought the idea that Bosch could be guilty. However, with Connelly you never really know. I never saw the ending of THE CONCRETE BLONDE coming. But I enjoyed A DARKNESS MORE THAN NIGHT even though I had the plot figured out very early on. I think I was just in the right mood for it. Sometimes it's the other way around.

Much as I like Connelly, calling his first four Bosch novels the strongest four book run in the history of mystery fiction is going pretty far. I'd go with Ross Macdonald's four book run in the mid-to-late sixties: "The Chill", "The Far Side of the Dollar", "Black Money" and "The Instant Enemy". I'd be hard pressed to find anyone else with a four book run even close to those.

I don't think THE BLACK ECHO really is quite strong and certainly not of his best. I found it a bit clumsy (something you don't easily find in Connelly otherwise) and some of the shifts between characters not very well-handled. And I think his attempts at humour don't work. He hasn't tried since.

Yeah, the problem about making a statement like I did about something being the best is that then you remember something else that's really good, or someone reminds you of it, and then you go, "Well, wait a minute . . ."

Thing is, I read the Connellys much more recently than I read all those other books, and I'm sure that influenced me. I'll just say I like 'em a lot and leave it at that.

I'm reading his "The Narrows" now and finding it interesting although not extremely compelling. I might have to try some of those earlier ones, though

I always thought the most interesting thing about A DARKNESS MORE THAN NIGHT was the fact that we see Bosch through other character's eyes through most of the book. The books up to that point had been in third person, but still told from Bosch's POV. This time we got to see what Bosch looked like to other people and it was often not a pretty picture.

I'm not sure the reader was ever really asked to consider Bosch a serious suspect in the crimes, but we do see Bosch thinking about his previous tactics and what they could lead to in the future. He struggles to come to grips with his darker side in this book.

I'm with Rick--I love Connelly's work, but it often gets derailed by certain quirks, like weird behavior patterns that just don't ring true. It's impossible to buy into the situation at the start of Darkness, because we know Bosch is not a killer and, as James points out, the mere existence of several more later Bosch books rules this possibility out.

Similarly, the protagonist's behavior in Chasing the Dime--why he needs to track down the woman who had his phone number, despite the fact he keeps getting beat up as a result--just didn't work for me.

And then there was the Bosch book (don't remember the title), where the female detective put herself in harm's way so that she could be a hero, yet had this backfire and end in her death. It just didn't work.

His best books are the most straightforward, with the focus on the case and the legwork required to come up with a solution. Much as I love the Bosch books, I think The Lincoln Lawyer might be his best-written book overall.