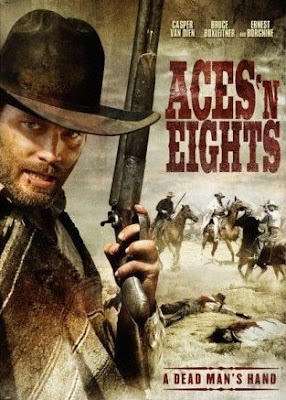 Since so few Western movies are made anymore, I feel sort of like it’s my duty to watch every new one that comes along. Imagine my surprise when I read that Ion (the TV network that used to be PAX) is going to start showing Westerns every Saturday night, starting with tonight’s ACES ‘N EIGHTS. Naturally, I watched it. The plot, about the railroad trying to steal land from the settlers, had more whiskers than Gabby Hayes, but the movie has a few things to recommend it. Casper Van Dien does an okay job as a hard-bitten ex-outlaw trying to go straight. He’s doing a pretty blatant Clint Eastwood impression in part of the movie, but he pulls it off fairly well. Bruce Boxleitner is an old friend of Van Dien’s character who starts out working for the railroad but then can’t decide which side he really wants to be on. Ernest Borgnine, looking very hale and hearty for 91, is fine as a crusty old rancher, just as you’d expect. And Jeff Kober, who’s made a career out of playing despicable villains, is as despicable as they come in this one. The script has one really good line (Borgnine gets to deliver it) and a very effective bit of business near the end involving Boxleitner’s character. Other than that there’s absolutely nothing here you haven’t seen dozens, or hundreds, of times before, and the dialogue justifying the use of ACES ‘N EIGHTS as the title is shoehorned in pretty clumsily.

There’s a lot of graphic violence, especially for a made-for-TV movie. An unrated version is being released on DVD next week. I can’t imagine what could be in it other than maybe even more blood. If you’re like me when it comes to Westerns, you might pick it up and be reasonably entertained. Or you could wait until next Saturday when the TV version runs again.

Ion’s Western schedule on Saturday nights appears to be a mix of old and new, based on the commercials. The main feature next week, showing right after the ACES ‘N EIGHTS rerun, is THE RANGER, THE COOK, AND A HOLE IN THE SKY, a theatrical movie starring Sam Elliott and Jerry O’Connell. We’ve seen this and I recall liking it, but I don’t remember much else about it. I’ll watch just about anything with Sam Elliott in it, though, just to listen to him talk. What a great voice. The week after that is another new made-for-TV movie, PRAIRIE FEVER, starring Kevin Sorbo. I’ll probably watch it, too.
Posted by James Reasoner at 11:08 PM

Sam Elliott does indeed have a great voice. I've always thought he, along with Tom Selleck, had the perfect look for westerns. Now Kevin Sorbo; I don't know. I'll reserve judgement until I've seen him though. I recently saw in a western, though I don't recall the title, and I really wasn't impressed. Maybe it's the whole Hercules thing(shrug).

I enjoy a good western myself. I bought the re-make of '3:10 to Yuma' and thought it lived up admirably to the original movie and short story classic.

Always glad to see some westerns featured. I've watched the Spaghetti westerns so many times I've got 'em memorized, so I wouldn't mind seeing some different ones, even if the themes are familiar.

I missed the first part of this movie, but stumbled in halfway through, and am pleased I did. As James noted, it has some mothballs on parts of the plot, but the surveyor for the railroad was an interesting (if naive and a bit blinkered) character for this sort of story. I was surprised at how well Bruce B. pulled off his character. And it was nice to see a former Tarzan (Caspar) in a western role. His portrayal reminded me less of Clint Eastwood and more of another Spaghetti Western actor, Terence Hill (MY NAME IS NOBODY, TRINITY, and others).