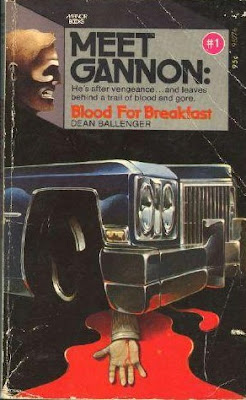 I nearly always enjoy a book written in a distinctive voice, and BLOOD FOR BREAKFAST certainly qualifies. Published in 1973 apparently in order to cash in on the then-current popularity of the Executioner and similar men’s adventure series, it’s the story of Mike Gannon, a security expert who returns to his hometown of Cleveland to avenge the rape and beating of his teenage sister by a couple of vicious college kids who are the sons of rich and powerful fathers. Those fathers will go to any lengths, legal or otherwise, to protect their sons, but Gannon intends to cut through all that and get his own brand of justice.

Although organized crime plays a part in this, because the rich guys hire hoodlums to scare off Gannon, BLOOD FOR BREAKFAST is really a class warfare book, with anybody who has money being unspeakably evil. Of course, poor people who can be bought off come across as being pretty bad, too. It’s almost like Gannon is battling money the same way that Mack Bolan battled the Mafia. This book is even more violent than the Executioner books, too, with Gannon cutting a bloody swath through Cleveland’s underworld on the way to his vengeance.

When I first started reading this book, I wondered if it was written by James Dockery, the original author of the Butcher series. The writing is that bizarre and over-the-top. But Dean Ballenger has his own style that doesn’t include any of Dockery’s catch-phrases, so my feeling is that there’s no connection between the two authors. Everybody in this novel, no matter who they are, speaks in exactly the same way, a slangy, side-of-the-mouth tough guy patter mixed with graphic profanity. The plot frequently makes no sense, and even when it does, it’s so far beyond belief that the reader is left just shaking his head. At least I was.

Despite that, I sort of enjoyed the book, probably because Ballenger brings such fervent sincerity to it. I don’t know anything about him other than that this was apparently his first novel. I can imagine him banging it out in a white heat, then having the manuscript make the rounds until it landed with Manor Books, a low-rent publisher if ever there was one. (And being a Manor Books author, I speak from experience.) Ballenger went on to write a handful of other novels: two more Gannon books for Manor, a Western for Major Books, assorted other men’s adventure novels. I wouldn’t say that BLOOD FOR BREAKFAST is a good book, but I found it interesting enough that I’d read at least one more book by Ballenger if I came across it.
Posted by James Reasoner at 11:31 PM

I'm not familiar with this one. I did read a number of those types back then(Bolan, Butcher, and Destroyer among them). But this one slipped by. It may be the publisher. The only book I have that was published by Manor, I believe, is Mandate For Murder by J,A.S. McCombie.

how many of these series were there? Every week I hear of new ones. Unbelievable :-)

That Manor was apparently mobbed up probably led to Manor Books being well-represented in the Enfield, CT, drug store where I'd buy my comics as a pre-teen, including mobbed-up Charlton Comics, in 1973-75...I picked up their edition of Harry Harrison's anthology NOVA 4 there, for example, as a gift for my father, but I read it as well.