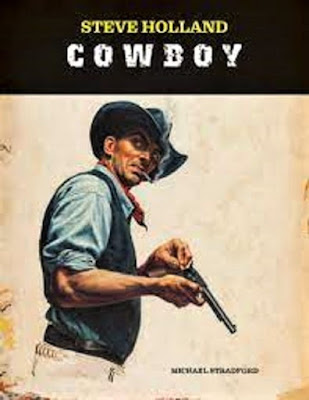 Considering all the Western paperbacks I read growing up in the Sixties and Seventies, how in the world is it that I never noticed the same guy is on nearly all of them?

And that hombre, of course, was none other than Steve Holland, the best and busiest paperback cover model in history. The new book from Michael Stradford, STEVE HOLLAND: COWBOY, covers that part of Holland’s career with an informative introduction and scores of beautifully reproduced paperback covers (with a few comic book covers included for good measure). The book also features many of the original paintings without the cover copy, and it’s fascinating to see how they were put to such good use to sell paperbacks to guys like me.

Well, I attribute that to the skill of the artists involved, as well as to Holland himself for being able to strike so many different attitudes in his poses. He was the best at what he did, no doubt about that.

Michael Stradford is the world’s leading expert on Steve Holland. This volume is the third book he’s devoted to Holland’s career, following STEVE HOLLAND:THE TORN SHIRT SESSIONS (about Holland posing as Doc Savage for the long-running series of Bantam paperbacks) and STEVE HOLLAND: THE WORLD’SGREATEST ILLUSTRATION ART MODEL. For readers like me who grew up with shelves full of paperbacks with Steve Holland covers, all three volumes are packed with fun and nostalgia, and I give them my highest recommendation.