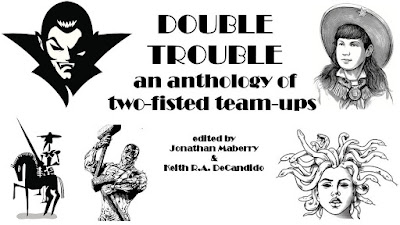 The International Association of Media Tie-in Writers is doing a Kickstarter for an anthology called DOUBLE TROUBLE: AN ANTHOLOGY OF TWO-FISTED TEAM-UPS, edited by Jonathan Maberry and Keith R.A. DeCandido. The theme of this anthology is team-ups between various public domain fictional characters (with a few historical characters thrown into the mix), and naturally, when I was invited to participate I came up with a story using pulp characters, one fairly well-known and another pretty obscure. Some of the novels featuring G-Man Dan Fowler have been reprinted, and a number of New Pulp stories about him have been written and published by various authors. I've always really liked the character and am looking forward to writing about him. For one thing, it'll give me an excuse to read more of the original stories from the pulp G-MEN to get in the proper frame of mind.

In my yarn, Fowler will be teaming up with two-fisted sea captain Stinger Seave, who appeared in several stories in ACTION STORIES and has never been seen since. You may remember that I reviewed the series here on the blog a while back. When I was reading them, I wasn't thinking about using the character, but then when this opportunity came up, he seemed like the perfect fit for the plot I concocted.

I think this will be an excellent anthology, and I'm honored to be part of it. You can help it come about by checking out the Kickstarter and pledging some funds to it, if you're of a mind to.

Posted by James Reasoner at 4:39 PM