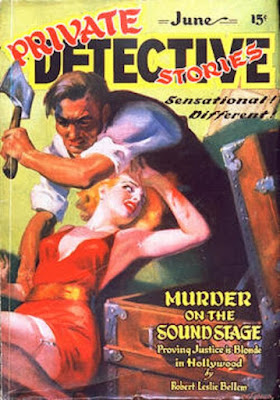 This is the first issue of PRIVATE DETECTIVE STORIES, from the same folks who brought us SPICY DETECTIVE, SPICY WESTERN, etc. It’s available in an e-book edition from Radio Archives, and I’ve been reading it recently, a story or two at a time between editing projects.

The headliner in this pulp, not surprisingly, is Robert Leslie Bellem’s legendary private eye character Dan Turner. The Turner yarn in this debut issue is a novelette called “Murder on the Sound Stage”, one of the longer Turner yarns I’ve read. Unfortunately, that uninspired title goes with the old plot about an actor being murdered on set when somebody fires a gun with a live round in it at the same time as a gun with a blank in it goes off. The victim had known that his life was in danger and had summoned Dan to the studio to protect him, but it was too late. The guy gets croaked right in front of Dan’s eyes . . . but not until Dan has encountered a beautiful blonde with murderous intentions of her own.

From there the action takes off hellity-blip and involves a beautiful brunette Russian babe (the dead gink’s wife) and a redhead who works as an extra in the galloping snapshots. All the ruckus takes place in the space of one night, and it’s a crowded night because Bellem crams in a lot. There are two more murders—or was it three?—and Turner gets bashed on the conk at least once before everything gets wrapped up in a fairly improbable manner.

As usual, there’s a considerable amount of enjoyment to be found in Bellem’s fast-paced prose. The guy could sling words, no doubt about that. And his plots were often complex and well-constructed. That’s not really the case here, and that’s what keeps this yarn from belonging in the top rank of Dan Turner stories. Worth reading, but a lot of them are better.

Next up is a true crime feature by C.A.M. Donne (Donald Cameron), “Vengeance of the Severed Hands”, about a husband who murders his wife and dismembers her to get rid of the body. I have no idea if it’s actually true or if Cameron, who wrote quite a bit for the Spicies, just made it all up. But it's written well enough that I didn’t skip it, which I often do with non-fiction features in pulp magazines.

“Pair of Tramps” is bylined Mort Lansing, but that’s a pseudonym for the very prolific Edwin Truett Long, who was one of Trojan Publishing’s stalwarts, writing under numerous pseudonyms and house-names. The protagonist in this one is a down-on-his-luck former private detective named Bane, who had to go on the run when he was framed for a crime by a local gambler. He’s come back to the city from which he fled to try to borrow some money from his former girlfriend, who happens to be the mistress of the gambler who framed him. That doesn’t work out, but Bane then meets a beautiful redhead, a former showgirl who happens to be up to her pretty neck in a murder case involving her husband, her rich father-in-law, and a knife in the neck.

I generally enjoy Long’s work, but “Pair of Tramps” is an excellent story, probably the best thing by him that I’ve read so far. The action never lets up, the plot is satisfyingly twisty, and the prose is top-notch, the sort of terse poetry that reminded me a great deal of Paul Cain’s work. Not as good as Cain, mind you, but almost as good as Cain is pretty darned good.

I’ve probably read some stories by Howard Wandrei writing as Robert A. Garron in various Spicy pulps, but as with Long’s story, Wandrei’s “Wrong Number” in this issue really impressed me. The tough, likable protagonist of this one, private detective Noel Athens, is hired to find the daughter of a newspaper tycoon. The girl has run off with a gangster. Yes, it’s a wandering daughter job, and the plot is pretty straightforward, but the writing is excellent, enough so that I’m going to keep my eyes open for more stories by Wandrei. (I have a couple of collections of his science fiction and fantasy stories under his own name and will get around to those eventually, I hope.)

“Nailed With Silver”, a novelette by E. Hoffmann Price, introduces Jeff Dargan, a private eye who went on to star in several more yarns published in PRIVATE DETECTIVE STORIES. In this one, he’s in Saint Augustine, Florida, enjoying a break after wrapping up a jewel robbery case, when he suddenly finds himself up to his neck in more trouble involving a beautiful brunette who wants Dargan to help her get some evidence for her divorce case against her husband, a sugar tycoon who owns a company based in Cuba. Well, there’s a murder, of course, along with another beautiful woman, some crooked politicians, and shoot-outs and fistfights galore. Price was another stalwart of the Spicy pulps, along with his prodigious output elsewhere, and I’ve never read a story of his that wasn’t at least enjoyable. I wasn’t sure about “Nailed With Silver” at first. The plot seemed pretty muddled. But then darned if Price didn’t pull everything together so that it made sense. I would up liking this one quite a bit.

Allan K. Echols is best remembered for his Westerns, I think, but he wrote quite a few detective yarns, too. His story “Sweet and Hot” wraps up this issue. It concerns a fixed horse race that turns out not to be fixed, a $20,000 bet, and a private detective framed for murder. While it’s not a particularly memorable story, it’s well-written and moves right along.

So, all of this plus a brutally effective cover by H.J. Ward makes this a pretty good first issue of PRIVATE DETECTIVE STORIES, setting it up for a nice long run. The stories by Long, Wandrei, and Price are really good, and the Bellem yarn is entertaining if not top of the line. I had a great time reading the ebook version of this memorable pulp debut.

You sold me on it pal

Wonder what got into everyone's breakfast, or if the SPICY folks just wanted to get this title off to a good start in the post-SPICY crackdown.

I've yet to read a bad Price story, nor enough.

Like Todd, I have yet to read a bad Price story. Imagine the difficulty of starting a new pulp magazine in the depths of the Depression!