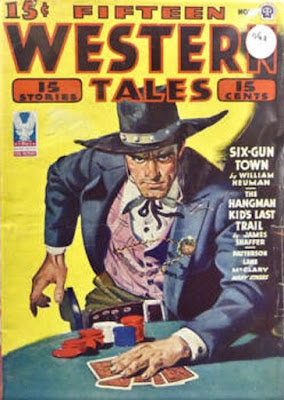 And so another Old West poker game comes down to a powdersmoke payoff on the cover of this issue of FIFTEEN WESTERN TALES. Sam Cherry was doing most of the covers for FIFTEEN WESTERN TALES during this era, but this one doesn't strike me as being Cherry's work. Whoever painted it, it's effective, no doubt about that. Inside are some excellent authors, including William Heuman, Tom W. Blackburn, Rod Patterson, Lee E. Wells, M. Howard Lane, Glenn Shirley, James Shaffer, Thomas Calvert McClary, house-names David Crewe, Ray P. Shotwell, and Logan C. Claybourne, and lesser-known authors Edwin K. Sloat and Byron W. Dalrymple. That poker player's left hand seems oddly misshapen. I'd like to think that plays into one of the stories inside, but I doubt it.
Posted by James Reasoner at 6:30 AM

His punching hand, with broken knuckles, vs. his gun hand. Or a slight painting error that could be only fixed so much under deadline...

Where would you put FIFTEEN WESTERN TALES in the relative measures of western fiction magazines...say, if you were giving out letter grades...or did it have a rather uneven run, as with DIME MYSTERY of recent discussion on Steve's site?

I'd say FIFTEEN WESTERN TALES is on the same level as NEW WESTERN and 10 STORY WESTERN among Popular's offerings. Lots of good authors and stories but a notch below BIG BOOK WESTERN and a couple of notches below DIME WESTERN and STAR WESTERN. Maybe a B- for a letter grade if BIG BOOK is a B and DIME and STAR are both A. I think it stays at that level pretty consistently, instead of going up and down like DIME MYSTERY. In the overall Western pulp field, I'd put FIFTEEN WESTERN TALES in the lower reaches of the second rank. Well worth reading, but you might have to pick and choose and wind up skipping some of the stories.

I think the guy's left hand was his gun hand originally, but it got busted up in a fight and he had to learn to use his right hand to draw and fire. That's the way I'd do it.