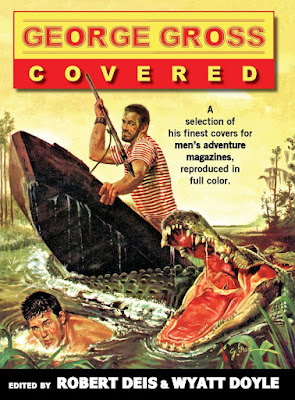 I first became aware of George Gross’s work when he did the covers for some of the Nick Carter, Killmaster novels published by Charter Books in the Eighties. He painted some excellent covers for books in that series by my friends Bob Randisi and Bob Vardeman. Later on, I realized that Gross got his start in the pulps, doing many covers for a variety of titles, but the ones that stand out the most to me are the ones on JUNGLE STORIES, where his version of Ki-Gor’s mate Helene became the gold standard for that character.

But between the pulps and the paperbacks, Gross painted scores of covers for the Men’s Adventure Magazines, and that’s the focus of GEORGE GROSS: COVERED, the latest volume from editors Robert Deis and Wyatt Doyle of New Texture Publishing.

This is one of the most beautiful books you’ll ever see, reproducing in vivid detail many of those MAM covers Gross painted. I’d post some scans of those issues, but they wouldn’t come close to equaling the reproduction in this book. In addition, Deis and Doyle provide an informative introduction, David Saunders contributes a fine biographical essay about Gross and his work, and fellow artist Mort Kűntsler, who was mentored by Gross, reminisces about their friendship and offers expert comments about Gross’s work.

Finally, the covers themselves. Well, they’re great. The action, the details, and the emotions expressed in them combine to create a real impact, the sort of visceral reaction that drew the eyes of potential readers to those magazines on the newsstand and made those customers want to buy them. Although they were inspired by stories in the magazine (for the most part), when I look at them, I want to write stories with those scenes in them. To me, that’s the ultimate test of a cover, when I think, “Man, I want to write the story that goes with that!” Gross rises to that level, and then some.

Overall, GEORGE GROSS: COVERED is just a wonderful book, available in both hardback and paperback editions. If you’re interested in the Men’s Adventure Magazines or just great action artwork, it gets a very high recommendation from me. 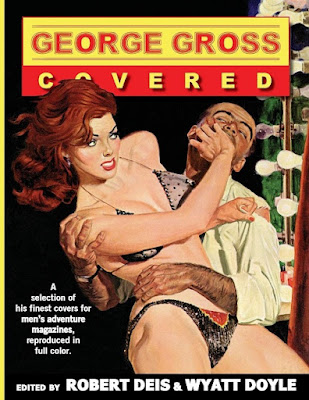 I'm a sucker for good art books, and I have quite a collection. Looks like I might be adding another to those shelves!