The Wild Adventures of Cthulhu - Will Murray 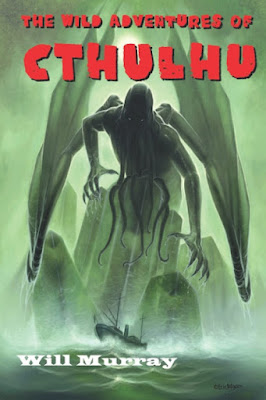 I’m sure I encountered mentions of H.P. Lovecraft in reading about Robert E. Howard in the introductions to the Lancer editions of the Conan stories during the Sixties. But I don’t think I ever read any fiction related to what we now call the Cthulhu Mythos until some of Lovecraft’s creations popped up in issues of Marvel’s DOCTOR STRANGE during the Seventies. I didn’t read any of Lovecraft’s original stories until much later.

While I’m only a lukewarm Lovecraft fan, I do find the Mythos pretty interesting, and I’ve enjoyed everything I’ve ever read by Will Murray, so I was happy to discover that Murray has published THE WILD ADVENTURES OF CTHULHU, a collection of ten Lovecraftian stories he wrote for various anthologies. Thankfully, he doesn’t try to recreate Lovecraft’s style in these stories, although after reading his novels written in the styles of Lester Dent, Edgar Rice Burroughs, and Norvell Page, I don’t doubt for a second that he could have written Lovecraft-like prose if he’d wanted to.

No, these are more straight-ahead tales, some with a good deal of action, and most of them involve agents of the Cryptic Events Evaluation Section, which is part of the National Reconnaissance Office (both fictional creations by Murray). As a result, what we get isn’t exactly U.N.C.L.E. vs. Cthulhu, but there’s a hint of that, as Murray acknowledges in his introduction.

The stories have an epic scope, ranging from the Arctic to the Antarctic to the depths of the Pacific Ocean, and they usually end badly for humanity. Despite that, some of them manage to achieve a considerable amount of dry humor, as well as being appropriately creepy and downright terrifying at times.

The overall outlook in THE WILD ADVENTURES OF CTHULHU may be pretty bleak, but I enjoyed it. The stories are well-written and move right along, and Murray obviously knows his stuff when it comes to Lovecraft’s work. If you’re a Lovecraft fan or a Will Murray fan, or both, I give it a high recommendation. It's available in both e-book and paperback editions.