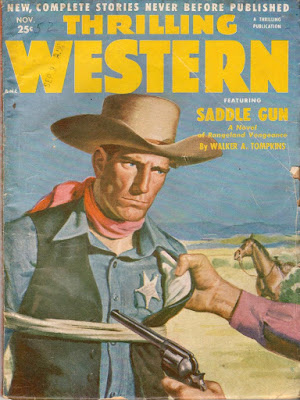 This is a pulp I own and read recently. The scan is from my copy. The cover is by Sam Cherry, but it’s not one of his better ones. I picked up this issue to read because it contains stories by a couple of my favorite Western authors, Walker A. Tompkins and Gordon D. Shirreffs. In addition to that, THRILLING WESTERN was a consistently good pulp for all of its long run, so I knew the chances were good I’d be entertained.

I usually talk about the stories as I come to them in an issue, but this time I’m going to change things around and take a look at the short stories first, then the longer ones.

“That Missouri Sodbuster” is by an author I hadn’t heard of, L. Kenneth Brent. As you might expect from the title, it’s a cattle baron vs. sodbuster tale, but unlike most such tales, this one take a slyly humorous approach. It’s entertaining for the most part, although I was waiting for one more twist that never showed up.

“Bluffing Ain’t Easy” by Francis H. Ames is more of an action yarn as a rancher and his future son-in-law, an Eastern dude his daughter brought back with her from college, run across a gang of rustlers at work and have to deal with them. There’s nothing you won’t see coming, but the characters are likable and Ames writes well, providing some nice action scenes.

“The Beautiful Guardian” by Gene Austin, an author who wrote several dozen stories for assorted Western pulps, none of which I recall reading until this one. It’s a pleasant enough yarn about a young cowboy, a trio of trouble-making brothers he’s feuding with, and two beautiful young women, one of whom he wants to marry and the other who wants to marry him. This seems like it should have appeared in RANCH ROMANCES in an earlier era, but it’s probably not hardboiled enough for the Fifties version of that magazine.

The last of the short stories is “The Devil’s Swampers” by Bill Burchardt, an author who started in the pulps and went on to write a number of Western novels for Doubleday’s Double D line and other publishers. This is a hardboiled tale of a small-time outlaw’s robbery of a cattle buyer’s office and the obstacles he encounters as he tries to make his getaway. I don’t recall reading anything else by Burchardt, but this is a tough, well-written story and I’ll be on the lookout for his name in other pulps.

“Frontier Signaler” is a novelette by Gordon D. Shirreffs, and not surprisingly, it’s an excellent story. It’s about a young soldier assigned to a heliograph detail in Arizona Territory. The Apaches are on the warpath and getting repeating rifles from some mysterious source, the cavalry keeps getting tricked into looking for them in the wrong places, and our young hero winds up tracking down the gunrunners and exposing the villains. The plot may not be all that original, but Shirreffs’ writing is top-notch and really captures the setting. Plus the whole tone of the story is very tough and the action scenes are great. I’ve never read a bad book or story by Shirreffs, and this yarn continues that streak.

Finally, “Saddle Gun” by Walker A. Tompkins is the lead story in this issue and is billed as a complete, full-length novel. At 60 pages of double-columned text, it actually is a full-length novel. Well, as long as many of the Ace Doubles, anyway. And as usual with Tompkins, it’s a fine story with a mystery element to go along with plenty of Western action. The protagonist, Lex Holt, returns to his home town carrying a Winchester ’73 in a fancy case, a rifle sent to him with a note saying that it was used to ambush and murder Holt’s brother. Everybody in the area believes the younger Holt was drowned in a flood. But Lex, who left years earlier because he didn’t get along with his stepfather, knows different, and when he starts to investigate, it’s not long before there are attempts on his life and then another murder, this time one for which Lex is framed. Jailed and well on his way to being lynched, Lex has to escape, elude the law, and root out the real killer.

The plot may not be all that hard to figure out, but it’s still a lot of fun. There are several colorful old geezers as supporting characters, as well as a beautiful girl who figures into the plot but doesn’t really have a lot to do. Mostly it’s Lex Holt getting himself into and out of dangerous jams, because Tompkins was one of those authors who liked to keep piling more and more troubles on his protagonists until it seemed like there was no way for them to set things right. As you can tell, I really like the way Tompkins plots and paces his yarns. “Saddle Gun” isn’t in the top rank of his efforts, but it’s still very good. I’m a little surprised it was never reprinted as a paperback.

So the overall verdict on this issue of THRILLING WESTERN is pretty favorable. The short stories are okay, nothing special but perfectly readable, while the longer stories by Tompkins and Shirreffs are top-notch, just as I expected.
Posted by James Reasoner at 5:00 AM

James, you are doing a much needed service by reviewing and discussing these western pulps. We have many reviews of magazines in the other genres such as SF, hero, detective and adventure pulps but very few dealing with westerns. It's very important that we continue talking about westerns because at one time they were the most popular genre with male readers. I mention men readers since love pulps were so popular with women readers.

Thanks, Walker. I just think there are so many good stories in the Western pulps that have never been reprinted and almost certainly never will be reprinted, so the only way people can read them is in those pulps. I hope I've prompted a few readers to seek them out.

James, you have definitely introduced me to quite a few authors I would not have tried otherwise. Eugene Cunnigham most recently.

Gordon Sherriffs is one of my favorites. Read a ton of his stuff, even his young adult adventures. Really knew how to convey the desert as a character. Wonderful stuff, if a little hard boiled for my tastes at times (one novel had an absolutely awful lynching at the start which was almost rough to get through).