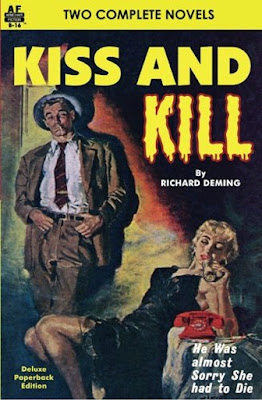 Richard Deming had a long career as a mystery writer, starting in the Fifties with hardboiled private eye novels featuring a character named Manville Moon and dozens of stories that appeared in the crime and detective digests, including some of the Mike Shayne novellas published in MIKE SHAYNE MYSTERY MAGAZINE under the Brett Halliday house-name. During the Sixties and Seventies he was a specialist in movie novelizations and TV tie-in novels under his own name and several pseudonyms. This is how I first became aware of him, because I read his Green Hornet novel THE INFERNAL LIGHT, written under the name Ed Friend, and his Mod Squad novels, written under his own name. Later I read his Starsky and Hutch tie-ins written as Max Franklin. (I was disappointed in the S&H books because they were novelizations of TV episodes I had already seen, rather than original novels based on the series, as Deming’s Mod Squad books had been.) 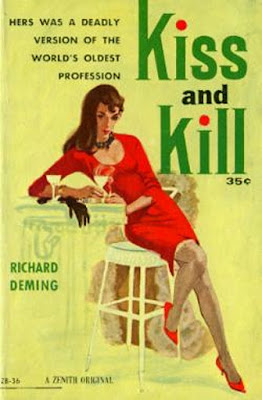 Because of this, I’ve always thought of Deming as a competent, reasonably entertaining writer but nothing special. I’ve had to revise that opinion after reading KISS AND KILL, an obscure crime novel of his originally published by the equally obscure Zenith Books in 1960 and reprinted as part of the Armchair Fiction line.

KISS AND KILL is narrated by Sam Carter, a con man turned murderer who specializes in a lonely hearts racket, marrying widows or spinsters and then knocking them off for their money. His partner in these schemes is a beautiful young woman named Mavis, who pretends to be Sam’s sister but is really his lover. They met when she, as an aspiring con artist, targets him as a mark without realizing that he’s a lot shadier than she is. Sam sets her straight, takes her under his wing, and soon they’re partners, quickly graduating from bunco jobs to murder for profit. They even get married along the way. Then, after several years together, they launch a scam that will turn out to be their most twisted and dangerous yet.

Deming’s writing is great, as lean and fast and hard as a bullet, and Sam Carter’s jovial, matter-of-fact evil is downright chilling. The reader never knows how much to trust what Sam is saying, and there’s no telling where the dark paths these characters go down are going to lead. I don’t know if Deming tried to sell this book to Gold Medal, but it’s every bit as bleak as anything that iconic imprint ever published. If you’re a fan of noir crime fiction, I give KISS AND KILL a high recommendation.

Just ordered mine, James. Thanks for reviewing it. I might have read some of his Mod Squad novels back in the 70s. I LOVED that series, and Julie will forever be the one that got away! I might have to look for those books again, just for old time's sake.

I agree with your take on Deming's writing. I've read some very good novels of his and some that were "average." For me, his masterpiece is a story titled “Hit and Run." It was in the Dec. 1954 issue of Manhunt. One of the best SS that Manhunt published. Thanks for posting this Richard Deming review.

Pete,
I recall liking those Mod Squad novels quite a bit. And that they had sex in them, which the TV show couldn't do in those days.

August,
"Hit and Run" is in the Second Richard Deming Megapack published by Wildside Press, which I just ordered.

I like Deming's pulp novelets and I have a stack of his paperback novels, including KISS AND KILL(the Zenith edition). Based on your review I've pulled it out and will read it soon.

Thanks for the tip. The guy on the cover looks a bit like Robert Mitchum.

I very much liked his Manny Moon series about a PI back from WWII combat service where he lost a leg. I agree with Art Scott's write-up some years ago about the series: "The Moon books have strong atmosphere, crackling dialogue, and considerable forward momentum, very much in the Hammett-Chandler tradition. That the Moon series never caught on while less appealing and well-crafted private eye series enjoyed great success is one of the baffling mysteries of the paperback market."

Reminded of this caused me to dig out the second Moon novel "Tweak the Devil's Nose" (1953) which I have had for years but never read (even though I loved the first). I'll try to remember to post a review when I finish.

That Deming could be excellent in the shorter forms is indicated by the number of times his stories were selected for the Best Detective Stories of the Year series. In the 1950s, David Cooke was the editor and Deming stories were in four or five consecutive volumes and I think later editors Brett Halliday and Anthony Boucher also honored his stories. I'd check the books to be exact but those shelves are in the bedroom where the visiting grandkids are sleeping and if I wake them, I'd be in big trouble.

The Manny Moon novels were originally published in hardback by Rinehart with Dell paperback reqprints and Broadman editions in the UK. I theorize Art's supposition was that if the Moon novels sold well, they would have continued in paperback even if dropped by hardback publisher. This certainly happened with other series such as Frank Kane's Johnny Liddell series which Dell continued and Henry Kane's Peter Chamber series which found several paperback homes after the hardback publisher dropped out.

I was told that Armchair used the UK edition of the novel for their cover.

Just received my copy (the original/vintage 1st pb printing) based on your review...very much looking forward to reading this one (probably will do back-to-back w/ another one just received: Clifton Adams' NEVER SAY NO TO A KILLER (Black Gat reprint)). Thanks for the rec on the Deming, James.

I really love your blog, and when I've sent comments to you in the past, I've always ben received warmly, so I kind of hate to nitpick ...

"Ed Friend" was a pseudonym of Richard Wormser.
(Check your copy of Paperback Confidential, which writes up both Deming and Wormser at length.)
An honest error, no harm done ...
And a Happy New Year to both of you!

Mike,
You are absolutely correct. I don't know what made me make that goof. I knew better.

And a very happy new year to you as well!

Just a quick note to thank you for reviewing this, which prompted a purchase and read. I enjoyed it and will seek out more Deming. I did enjoy his Dragnet book some years ago.