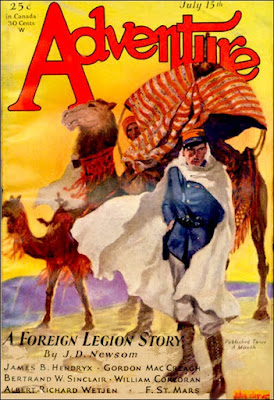 I enjoyed the first Kingi Bwana novella, “The Slave Runner”, quite a bit, but Gordon MacCreagh’s second novella in the series, “The Ebony Juju” (originally published in the July 13, 1930 issue of ADVENTURE) is even better.

This yarn finds the American hunter and freelance trouble-shooter named King being asked by an official of the British government to investigate rumors of gun-smuggling and a possible native uprising around Lake Victoria in Africa. King, not wanting to get wrapped up in all the red tape of working for the government, refuses. But he plans to head in that direction anyway, since he’s on the trail of a fortune in ivory that’s supposed to be buried somewhere in the area.

Wouldn’t you know it, the bad guys, fearing King’s possible involvement, decide to kill him to eliminate that potential threat to their scheme. (Doc Savage’s enemies made this same mistake, over and over again.) The attempted assassination fails, of course, but now they’ve gotten King actually interested in what’s going on in the area. He discovers that the natives (and yes, they’re very restless) are being stirred up by a large idol carved of ebony that can move and talk when it’s possessed by the spirits. (Didn’t I see this same plot in at least one Tarzan movie?)

Eventually King figures out everything that’s going on and foils the villains. You knew he would. Along the way, though, there are a couple of very suspenseful scenes and a lot of fine, authentic writing about Africa. These Kingi Bwana stories are starting to remind me of Robert E. Howard’s El Borak yarns in the way they’re structured, which makes me wonder if Howard read them. We know he was a fan of ADVENTURE. The locations are different, of course, and MacCreagh’s work lacks the breakneck pace and action of Howard’s stories. MacCreagh’s stories move along more deliberately and seem more concerned with creating tense scenes, which they do quite well. But there’s the same element of the “Great Game”, the political and espionage manueverings between England and Russia as they try to solidify their power in what they consider a backwards part of the world.

I’m only two novellas in, but I’m really enjoying this series so far. In this story, we learn that King is a Westerner, having grown up in Dakota Territory, and if they had made a Kingi Bwana movie back in the Thirties, Randolph Scott would have been perfect for the part. I’m glad I have the entire series and will continue reading and reporting on it here.

And good fortune smiles upon me. Roy Glashan's Library comes through again!