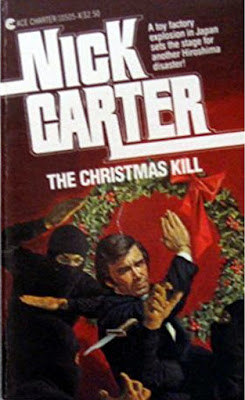 I started reading the Nick Carter, Killmaster books when I was a freshman in high school. My first one was HANOI, and the blend of sex, violence, and international espionage had me grabbing up every book in the series I could find for the next several years. I didn’t really burn out on them until I was in college, and even after that I would read one now and then.

With Christmas coming up, I thought it might be appropriate to read a Nick Carter novel I’d never read, THE CHRISTMAS KILL, published in 1983. In this one, our hero, Agent N3 (with the Killmaster designation) for the super-secret government agency AXE, is sent to Japan by his boss, David Hawk, because an old friend of Hawk’s has asked him to investigate what appears at first to be a case of industrial espionage and sabotage. It seems that someone has blown up part of a factory that’s making toy robots to send to the United States for the Christmas toy rush, and the owner of the company blames a competing American-owned firm. However, as soon as Nick arrives in Japan, people start trying to kill him, so it doesn’t take him long to figure out that there’s more to this case than what it seems.

And honestly, if you can’t figure out everything that’s going to happen in this book, you’ve never read any secret agent novels or seen any movies in the genre. It all plays out exactly like you’d expect . . . which isn’t always a bad thing. I got a considerable amount of nostalgic pleasure out of reading this one, even though it’s a pretty minor entry in the series. I enjoyed it enough I might read some of the others I never got around to reading before.

When I starting reading these books, I had no idea who was writing them, of course. But I figured out that there had to be multiple authors and I already kind of knew what a house-name was. By now, most, maybe all, of the Nick Carter novels have been attributed to their actual authors. THE CHRISTMAS KILL, for example, was written by someone named Joseph L. Gilmore, who wrote eight Nick Carters as well as at least one suspense novel and one horror novel under his own name. His style is very straightforward, nothing fancy about it, but despite the thin plot he keeps things moving along at a fairly nice pace. This book is from the era when the books were written in first person, and I’ve always been fond of those. (The series is divided into three eras: third person narration and the hero referred to as Nick; the first person books; and then back to third person, with the hero usually referred to as Carter. I like the first two eras the best and never warmed up to the more impersonal later books.)

A number of my friends wrote Nick Carter novels over the years, and I tried to sell one myself, wrote several chapters and an outline for it, long since lost. But I remember the title I put on it: THE MONDRAGO STRIKE. Don’t ask me anything else about it, but I still like the title and think it sounds like it would have made a pretty good Nick Carter.
Posted by James Reasoner at 4:30 AM

I've never read a Carter book, but the name of his boss triggered something: Is David Hawk the lead character in that series of book about Hawk?

Like you, I started reading Nick Carter in my youth. I'd buy them whenever they showed up at a used bookstore or thrift store. Now, they've disappeared from such places. But they're still available online.

Scott,
No, there's no connection between this series and the Hawk series, other than the fact that the guy who did the Hawk series, Dan Streib, also wrote a few Nick Carters, I believe. But the characters are completely different.

George,
I still come across Nick Carters in used bookstores, but nowhere near as many as I used to. I have a pretty good stack of unread ones. Whether I'll ever get around to reading more than a few of them is debatable, but I'm glad I have them.

Of course, Bill Crider's first published book was a Carter, THE COYOTE CONNECTION (1981), which anticipated the Donald Trump obsession by a generation! A group of Middle East terrorists tries to slip across the border at Brownsville, Texas with the "masses" of illegal immigrants.

I've got a quite a few of the older ones around here but don't often read one.