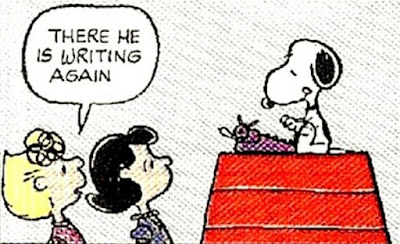 So how many years is that, now? Yeah, 41, that's right. 41 years ago today that I sold my first story and became a professional writer. I've written about that and much of the background to it in previous December 27th posts, and if you're interested and haven't heard about it until you're bored to tears, I hope you'll go back and take a look at them. In that 41 years, I've written 358 novels (got a good chunk of #359 done), more short stories than I've ever counted up, one non-fiction book, and a bunch of outlines, letters, emails, and blog posts. I believe it was Ed Gorman who once told me that a writer is somebody who sits in a room and types for 30 years. Well, in my case, it's 41 years and counting, because I think I have some good years left.
Posted by James Reasoner at 5:00 AM

Actually it has been almost thirty years for me, but for the first twenty it was all shorts. I think my first one was in the early nineties. The story won a second place in the North American Auto Show and was published on their website. A strange start but Detroit-worthy perhaps.
Congrats to a most productive writer.

As I tell you often, your productivity is remarkable. So, too, is your imagination to dream up all those stories. A true modern-day pulpster!

Many more years to come, and more writing as long as it's a good thing to do, to both you and Livia.

A writer is a guy who keeps typing for 30 years, but it sure helps if one keeps trying to publish, as well. First writing for pay, 1983, here. Still haven't gotten the hang of that latter part.

Every year I'm amazed again when you post your stats. Congratulations on another productive year, James.

Another year and once again incredible - congratulations on year 41.

I appreciate all the kind words, folks. Writing keeps me off the streets, at least. Otherwise I'd be out raising hell and getting into trouble.

Heck I wrote three books this year and I'm pooped--haven't written a word in six months!

It took me about ten years to sell my first ten novels. Several of those were ghost jobs, and one was bought and paid for but never published. The first year I wrote and sold multiple novels was 1986, when I started working for Book Creations Inc. I wrote four books that year. I don't think I ever wrote less than six in a year after that, up to as many as 16 one year. (I wouldn't even attempt that many now.) I sometimes feel like I should have worked harder and done more when I was younger, but actually, I just didn't know how to at that point. It took a lot of years of figuring out what I was doing.

always looking forward to more from you. You've written more books than a lot of people ever read.