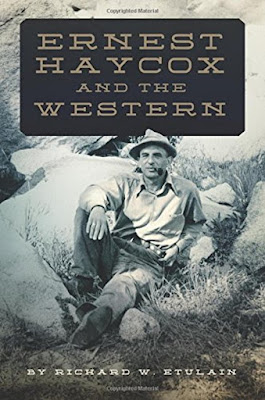 Reading ON A SILVER DESERT, the biography of Ernest Haycox by his son Ernest Haycox Jr., prompted me to read this book as well. ERNEST HAYCOX AND THE WESTERN by Richard W. Etulain is a fairly new book, released earlier this year, although much of it is drawn from Etulain’s 1966 doctoral dissertation. It’s not a biography, although there’s necessarily some information in it about Haycox’s life, and not exactly a critical examination of Haycox’s work, either, but more of a book about Haycox’s work and career, how he approached the writing of his stories and novels and how he handled the life of a professional author of Western fiction in the first half of the 20th Century.

This is just the sort of book I really enjoy. I never tire of reading about what, how, and why writers write what they do. Etulain devotes a lengthy chapter to Haycox’s time as a Western pulpster, from 1924 to 1930. After that, although Haycox still wrote some for the pulps, he had broken in to the slicks and sold most of his work to COLLIER’S. As a pulp fan, this part of the book is probably the most interesting to me, but the later chapters about Haycox’s work for the slicks, the movies based on his stories, and his efforts late in life to break away from traditional Westerns and write major historical novels, are all well written and well worth reading.

Having read these two books, I’m in the odd position of having almost read more about Haycox and his work than I’ve actually read of his novels and stories. I’m exaggerating, of course, but because, as I’ve mentioned before, I was never much of a fan of his books, I’ve barely scratched the surface of what he produced. I have quite a few volumes on his work on my shelves, though, and plan to read something else by him soon.