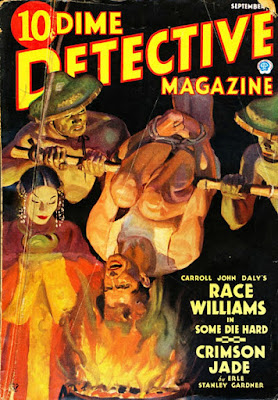 Some days Norman Saunders is my favorite pulp cover artist; some days it's Walter Baumhofer. Today is a Baumhofer day. That's a really striking, evocative cover, and the authors inside this issue ain't bad, either: Carroll John Daly (with a Race Williams story), Erle Stanley Gardner, Norvell Page (a Ken Carter story), and Cornell Woolrich. As I've said many times before, just another day at the newsstand during the pulp era.
Posted by James Reasoner at 5:00 AM

This is a pretty good issue. Great cover and the stories are also pretty darn good.

I've never understood the sadistic torture covers. Were they really supposed to appeal to anyone? If I'd been a potential customer in the day, I'd have probably skipped the issues, or maybe bought them in spite of the cover.

Any issue with Baumhofer and Woolrich together is a good issue indeed.

Yikes! The only other time I've seen that done was in the Cornel Wilde movie, "The Naked Prey".... what a horrible way to go!

Hi Rick. I can understand your puzzlement over the sadistic torture covers but the simple fact is that they sold magazines. Harry Steeger of Popular Publications is on record saying that he noticed the sales and thus created the big three of the weird menace magazines: HORROR STORIES, TERROR TALES, and DIME MYSTERY. All the covers show torture scenes and it wasn't just in the 1930's that readers bought these magazines.

The men's adventure magazines in the 1950's and 1960's also showed torture scenes on the covers and they sold very well by showing Nazis torturing young girls and GI's. The WW II vets bought these magazines and laughed like hell at the covers and insane stories. They had won the war and thought the magazines were funny and enjoyable.